QI: The Book of General Ignorance edited by John Lloyd
Compendium of popular misconceptions, misunderstandings and common mistakes culled from the hit BBC show, QI. Published to coincide with the fourth series broadcast in September 2006. If, like Alan Davies, you still think that Henry VIII had six wives, the earth has only one moon, that George Washington was the first president of the USA, that Bangkok is the capital of Thailand, that the largest living thing is a blue whale, that Alexander Graeme Bell invented the telephone, that whisky and bagpipes come from Scotland or that Mount Everest is the world's tallest mountain, then there are at least 200 reasons why this is the book for you. 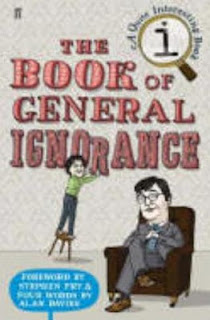 You don't know what you think you know.  You see, I'm right. You are Generally Ignorant. But don't worry, so are lots of other people. There is something you can do about it, however, and that is read the QI Book of General Ignorance.

There are several QI publications, but the book of General Ignorance is the closest to the format of the show, namely, common knowledge and urban myths are quite often utterly wrong, and the real answers are usually a lot more Interesting than the cheap, synthetic impostors.

The original Book of General Ignorance is one of the best-selling books for most sellers, and rightly so. In addition to learining how many wives did Henry VIII had, what has a three second memory and what man-made objects can be seen from the moon, you will also learn what rhymes with orange, who the most dangerous American in history was, how many muscles you have in your fingers, and many more besides.

The format of the book means you can either dip into it in a spare few minutes, nibbling at a bite size section of interestosity, or simply plough through it, devouring it all in one go. The original work has been completely revised and corrected, and the new material is as good and interesting as the old.

All in all, an entertaining, brilliantly researched, well-written, and in these times of pride in ignorance, vital book. Read it, learn it, live it. A defiante 5 stars for me on this one!