Churchill's Wizards: The British Genius for Deception, 1914-1945 by Nicholas Rankin
This is the story of how the British really won two world wars - by conning the Kaiser, hoaxing Hitler and bluffing their way out of trouble. Pretend German radio stations broadcast outrageous British propaganda in German. British geniuses broke German secret codes and eavesdropped on their messages. Every German spy in Britain was captured and many were used to send back false information to their controllers. Forged documents misled their Intelligence. Bogus wireless traffic from entire phantom armies, dummy airfields with model planes, disguised ships and inflatable rubber tanks created a vital illusion of strength. Culminating in the spectacular misdirection that was so essential to the… more » success of D-Day in 1944, "Churchill's Wizards" is a thrilling work of popular military history 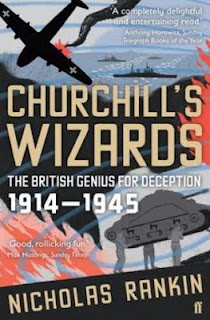 Churchill's Wizards: The British Genius for Deception 1914 - 1945' describes British military deception in two World Wars: the roles of the intelligence services in grand and smaller deception plans. Guerilla warfare, double agents, black propaganda, camouflage and even sniping are all covered. I found the principles and practice of camouflage and the contributions of painters very interesting. The author describes the roles in the development of deception of well known military figures such T E Lawrence and General Wavell, but also presents the activities of people more famous in other walks of life. These include the authors John Buchan, Ian Fleming, Dennis Wheatley, George Bernard Shaw, HG Wells and Arthur Conan Doyle!

Together these interwoven threads of history made a thoroughly enjoyable read for me. The one minor frustration I found came from the title of the book. This implies the involvement or `ownership' of Winston Churchill in the majority the work. I spent the first half of the book anticipating some revelation of his critical involvement in the development of deception in WWI, but it never came! In fact it was apparent from the book that WSC had little or no involvement in the deception activities relating to WWI.

His involvement in the heart of the story - deception - only became clear about two-thirds of the way through the book, once WWII was well underway, after which our heroes - the Wizards - could truly be described as `Churchill's' because of his direct contributions and patronage. Despite the slightly misleading title I found the book informative, well written and a solid three stars but only because in some places the book dragged a bit too much for an easy read.