Tartaros Pattern Terminator Squad
Tactical Dreadnought Armour, or Terminator Armour as it is more usually known, is the most resilient form of personal protection available to the Adeptus Astartes. Originally developed during the closing years of the Great Crusade, and adapted from the heaviest of industrial gear, several types and patterns were developed concurrently. 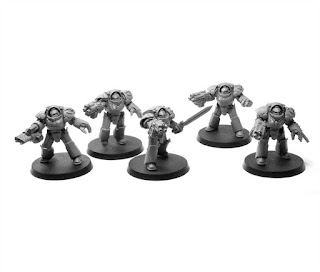 Of these, the Indomitus pattern is perhaps the most widespread, due to its template being held on key Forge Worlds such as Mars, although Tartaros Pattern Terminator armour is also issued to the Veterans of a Chapter’s 1st Company. 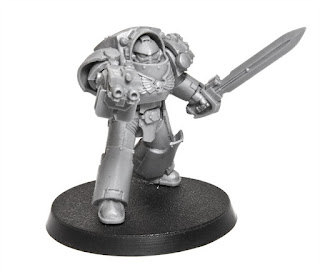 Perhaps the most advanced form of Tactical Dreadnought Armour, the Tartaros pattern shares many systems with the MkIV ‘Maximus’ pattern of power armour, and provides greater mobility for its wearer than the Indomitus pattern with no loss in durability or protection. 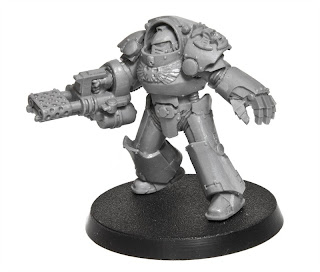 The Tartaros Pattern Terminators set, designed by Will Hayes, is a full resin kit that comprises five Terminators, armed with power fists, a power sword, storm bolters, a heavy flamer and enough optional attachments to arm four Space Marines with chainfists. This detailed squad will be available to purchase in limited numbers at the Forge World Open Day on Sunday 1st April, and is also available to pre-order now for despatch from 10th April.

===============================================
I love these bad boys!!!  That much they get multiple pics and ive cut most of the newsletter bits on events out! If I'm only allowed a few models this year i want these, they would look awesome in the Mentors scheme marching through a "space hulk". I love the retro look and how they tie in with the contemptor, only hope they do an assault cannon, lightning claws and thunder hammers etc for them.
Codified by Millest