The Last Ditch by Sandy Mitchell
Imperial commissar Ciaphas Cain returns to Nusquam Fundumentibus to crush the ork attacks which have been plaguing the frozen planet. But when his ship crashes into the wastelands outside the capital it disturbs a far greater enemy, one which has lain dormant under the permafrost since long before the Imperium came to this world, and could now threaten the whole sector. Faced with ongoing greenskin raids and keeping an over-enthusiastic novice commissar under control, Cain must rally his men and confront whatever emerges from beneath the rapidly melting ice... 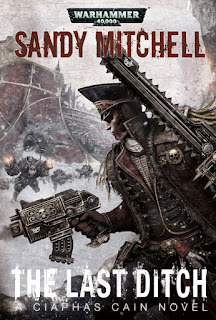 Yet again commissar Ciaphas Cain finds himself staring death in the eyes. This time it's due to negligence and greed. He is attached to the 597th Valhallan regiment, on route to a planet with an Orc infestation. The ship they are travelling on suffers from shield failure while in the warp, and something manifests on the bridge. The instruments on the bridge are badly damaged in the fight against the demon, and they lose control of the ship. Not even down on the planet and fate is already against Ciaphas Cain, who is now trapped in a steel coffin hurtling towards a fiery death in the system's star.
As always, there is a million to one chance a risky plan will save them, and as any Terry Pratchett reader knows, these will work nine times out of ten (or eleven times if you're very lucky). You can't really call what happens next a landing, it was more of a slightly controlled crash. By controlled I mean they got to choose to hit a planet instead of a sun. On the way down they hit a mountain, which happens to be where the Orc horde is hanging out. Ciaphas Cain and the Valhallans now face some very angry orcs bearing down on them. It's pointed out how this is something the Valhallans look forward to, orcs being their hated enemies, but not at all to the liking of Ciaphas Cain. His favoured enemy is danger of any kind, but he'd rather run away than face it. Wise man.
Sandy Mitchell has done a remarkable job with The Last Ditch. Ciaphas Cain is a great character, and I would struggle to jot down everything awesome about him. According to himself, he is a selfish layabout, who wants nothing but peace and quiet, but also the admiration of those around him. Sandy Mitchell has always made sure to, in my opinion, to give us room for doubt. I think Ciaphas Cain is a hero, just a very modest one. Not only is our hero well written, Jurgen, his aide is also great. Together the two form a truly dynamic duo, capable of overcoming every obstacle. Whereas Ciaphas Cain is a dashing leader of men and a great swordsman, Jurgen is quiet, stoic, and a master marksmen. He is also not the sharpest chainsword in the armoury, but his ability to follow orders to the letter more than makes up for it. The dialog between the the two is so much fun, and even though Ciaphas Cain mocks Jurgen on occasion he does not tolerate rudeness from others directed in his aide's way.
Sandy Mitchell delivers a stronger plot than in the previous Ciaphas Cain novel, The Emperor's Finest. It feels more like one coherent story this time, instead of three short stories, which was the case in The Emperor's Finest. I won't say the story in The Last Ditch is amazing as by now they seem to follow a familiar script. Ciaphas Cain arrives to deal with threat A. He tries to direct from behind as many bodies between himself and danger as possible, but manages to volunteer to a dangerous mission. He then discovers threat B which is much greater than threat A. For me the plot is just the medium through which all the awesome action and punchy dialogue is delivered, so I can easily forgive the familiarity. This is what I expect from my Christmas reads anyway, cozy and fuzzy familiarity. Makes me feel safe and happy.
The Last Ditch is another triumph for Sandy Mitchell, which delivers on all points I expect from a Ciaphas Cain novel. No matter where our Commisar turns he faces danger, unspeakable horror, or Jurgens BO. When he is not busy fending off alien killers, he is usually in the middle of being sarcastic or making a funny observation. Fun, danger and BO, what more could you ask for? A good old 4 stars for me as it keeps the character going, just a shame there isn’t much development (or Amberley) in the novel but lets see what’s coming in the future.﻿