So the build process is slowing down in the lead up to our little mans first birthday and christmas but I have taken some time to tidy up my resin turrets and begin on conversions for commanders. I seem to have most turret types covered and will only be using plastic turrets for Battle cannons and Eradicators, I aim to have the ability to swap various turrets on to a pool of 6-9 Russ chassis - I have 7 already.

First up we have the commissars, whilst in game it makes no difference I like the idea of commissars in tanks. Also as I hate painting faces I have used various Death Korps Commissars that have been cut and placed (to be glued eventually) to create a dynamic Commander. 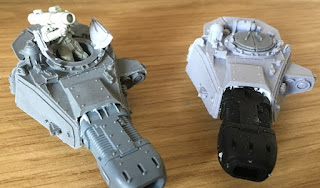 Next up Is the Volkite, Vanquisher and converted Punisher I will be using on my command tank, with a sneak of my own Pask. 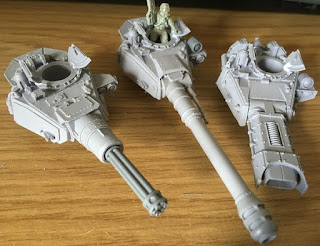 This is my prefered version of the Punisher using a DKOK Demolisher, the rules for the tank are great but the plastic model lets it down a touch. A very simple conversion but I think it fits the style of the turret better. You can also see one of my tank crew conversions using the elysian drop troopers, I like these are tank crew as the lightweight armour and jumpsuits really does work for tank crew as they usually dont have the same kit as line troops. 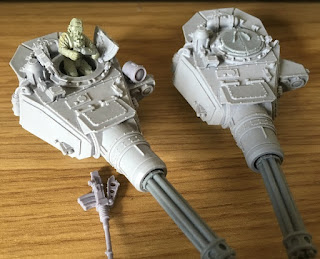 Next up are the demolishers and exterminators, nothing much on these in the way of conversions apart from crew, but has to share are I love the forgeworld turrets. 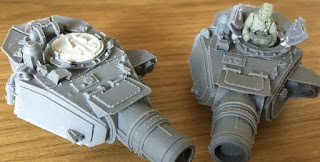 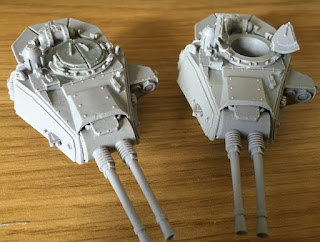 fingers crossed once these are sorted I will be able to get on to building the chassis but as I am going for cut and paste style for the line tanks, the command tanks might get some extras, there probably wont be many pictures.
thanks for looking
Codified by Millest 4 comments: