Good Day All!
Well folks it seems you've all spoken both on the blog and on the posts on my various forums i belong to and the decision is in!
Yes that's right its time to go with scheme B
That's the green armour over the grey/camo gear. However after a week of tediousness at work and some evaluating of spare time, not to mention my sanity, I have unfortunately needed to come to a compromise!
It seems after playing with the test mini again that painting the whole force in the COMPAT will slowly but surely drive me insane! well further insane should i say. So to save my sanity i have decided only Veterans and Storm Troopers will get the COMPAT (and I'm planning a lot of Storm Troopers for this force at a later date) and possible some command squads, such as the company HQ. Tanks will still get the COMPAT style camo I had planned as will Sentinals. The compromise however is that the bog standard Grunts will get a much simpler camo consisting of codex grey with some green folded in for pattern under the green armour.
Whilst nowhere near as spectacular as I had planned i think it will look very cool and once the whole force is assembled will pull the look off perfectly.
Over this weekend I wont be completing any work on the force as other plans are at the fore but come next week the construction will start anew and hopefully by Tuesday I should have the first conversions up for your to see! Though keep your eye out for some pics of my weekend if I get round to taking any. You might all get lucky!!!
Have a great weekend and see you all soon
Millest
Codified by Millest No comments:

Folks
just a little news for you all, the lovely guys over at The Bell of Lost Souls (BOLS) have decided to tie in with the launch of their new campaign pack to hold a little challenge, you to can join the Macharian Crusade Independent Character Challenge! 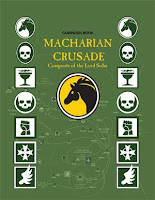 A little bumpf from their site:

With the kickoff of our Macharian Crusade book, its Challenge Time! This challenge goes out to all of our intrepid modelers and 40k narrative gamers out there. Today I introduce the: Macharian Crusade IC Challenge!Your goal is to flip through the Campaign book, talk to your fellow gamers and figure out who you would like to play. Pick an army that really fits in with your play style, your existing collection, or maybe you just love their background. You job is to submit to the BoLS email box (upper right column) the following:
A high quality pic of a single converted and painted Macharian Crusade Independent Character against a white background
A very brief rundown of the bitz used to convert your trooper.After a week or two, we will post the top finalists BoLS receives and put up a poll for you, our dedicated readers to judge.

So folks time for you to get your bits box raided and your pdf downloaded and join in the fun and games at BOLS.

DISCLAIMER: the Macharian crusade image is the property of BOLs and was designed by them, it is now use with thier permission but is hosted by me to save their bandwidth. I am not in anyway affiliated with the BOLS but I enjoy their work hence the post. Any issues please contact me . Thanks

Children of Men (and mice!)

Right ho folks time to let the cat out of the bag on this one!!

Some of you may know from my many ramblings on DAKKADAKKA that I'm planning something a little special for my Imperial Guard, so lets tell everyone some of the plans now.

As the title of the post suggests it revolves around the movie Children of Men, one of the best films of the last 10 years and without doubt a film containing one of the best military forces ever, a futuristic British Army. So as a little tribute to my favourite films I have decided the troops of my force will all be wearing the camo used in this film, something jokingly referred to as COM-PAT (of which I am lucky enough to have aquired 2 sets) which looks something like this: 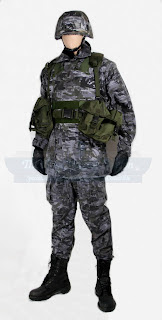 Pretty slick eh? I know it looks difficult so any tips as to how to paint it would be appreciated, however i do have one slight problem. Now no bad jokes here please but I've got problems with my Helmet! Its a nice simple one, COM-PAT 0r Olive Drab. So I'm turning to you my readers for some suggestions on this too and will be running a poll on the side of the Blog (and on some of my favourite forums) until Monday evening.

Now for some test pics, I apologise about the quailty of both the photography and of the painting but both were done very quickly, so without further ado here are the contestants: 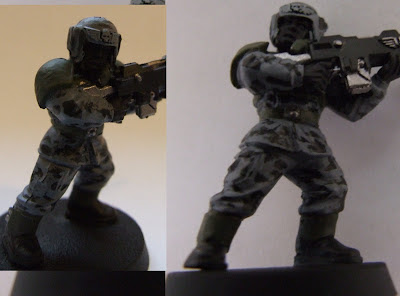 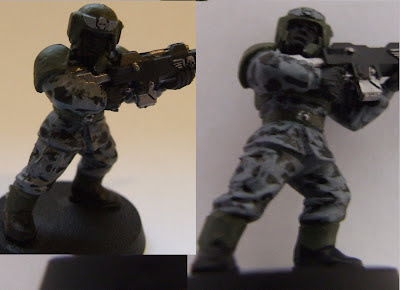 Now I know the quality is crap but once some of you lovely folks have made some suggestions about getting the scheme down well or at least of a reasonable quility I'm sure they will look pretty awesome! Not to mention I have some seriously cool plans for the Tanks in this force.

So remember folks please vote in my poll or I'll be forced to send these boys round:

Enjoy and Come back soon for more fun and games

Hello, my names Millest and I've been playing 40k for 14 years, I've been clean for............. Ooops sorry i thought I'd got clean for a minute there!!
Well I guess not so I've finally done it, I've decided to get all the little plastic men out of the box at last and get them organised for painting. Yes thats right you heard me I am a strange little man. I've been toying (no pun intended) with the idea of starting my Imperial Guard Army again for quite sometime and the new version of Warhammer 40,000 has given me the kick to do it at last!
So this evening after not doing a lot I thought I would dig up my old Army list over on the Terra forum here:
http://www.40kterra.com/forums/f245/millests-1500pt-ig-toxg-entry-thread-6644.html#post106579
I then got all my models out for this small 1500pt point strike force, and well......! Well see for yourselves: 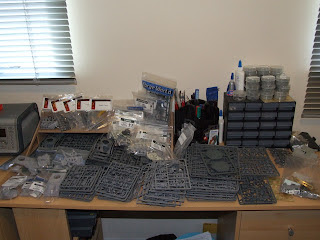 Yes I really do have that much plastic! There's also a FW basilisk somewhere but havent got a clue where, its bound to be in a box somewhere.

Oh and yes someone who shall remain nameless, really loves Forgeworld and other resin add-ons:

I've ordered all my paints and am looking to be saving up for a Baneblade for this little lot, so it looks like there might be a fair bit of blogging on this project going on over the next few weeks. Also later in the week (probably thursday evening or friday morning) there may be a poll up for a few days (well till monday at least) asking you, my readers (all 3 of you) to help me decide on some final touches to the colour scheme, so prepare yourselves Folks for some badly painted test minis.

have a good 'un folks

Thank you! Welcome everyone, this is where over the coming days I intend to post up little updates on all the projects I'm running. Thats everything from painting little plastic men creating new and scarier Airsoft monstrosities. Of course there will be some randomness along the way, what blog would be complete without it!

So without further ado, Welcome and Enjoy