Today saw the delivery of the latest tool in my hobbyists arsenal, a brand new Iwata Kustom CS airbrush.

After attending a recent course ran by SnM stuff in camberly (hopefully a review will be coming soon) and using one there i decided to part ways with my badger 105 (a reliable brush in its own right) and upgrade to this beast.

Whilst heavier than my previous brush the smooth trigger and rugged but accurate design made this a must have,

As you can see from the first picture it came with all the usual goodies from Element Games, a nice free pen and importantly a free sweet. As always ordering was smooth and postage fast so for that 5 out of 5 for element. 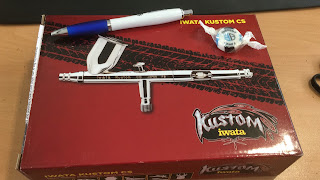 From the outside packaging is quite basic and nicely understated, it doesn't convey the brushed aluminum joy within the cardboard sleeve. 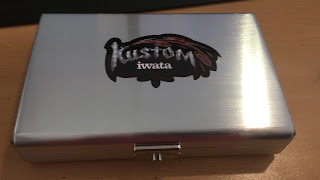 inside however is a different matter the rugged and solid aluminium case is a joy to behold, i honestly feel i could run over this in a car (albeit a small one) and it would survive. The logo is good quality and the weight of the box reassuring. 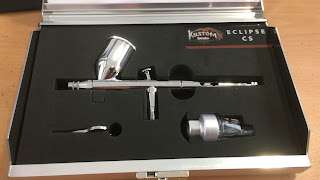 inside the airbrush is accompanied by not only a small tool for tightening but also a moisture trap (that's a good tenner saved now i don't need to buy one). The foam is rigid and very tight on the parts but importantly holds the brush well. Given the need of Royal Mail to deliver items by bouncing them to you this is a good thing. The whole set feels well put together and generally well presented.

The brush itself is immaculate (apart from my greasy prints on it) and all actions are smooth and free. Threads are clean and well formed and all parts fit together tightly. The brush isn't cheap but you get what you pay for and shy of me mashing the needle or rubber o-rings perishing (which no-one can avoid) it generally should last a lifetime and comes highly recommended.

I'm really enjoying the current trend of the Games Workshop Boxed Games but cant decide if they should re-release everything or just forget somethings, for example: 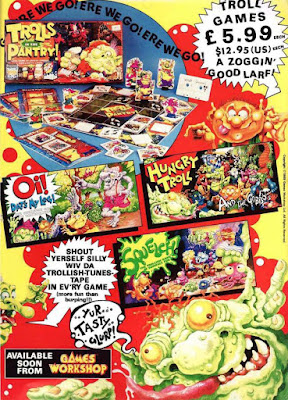 So after a bit of a hobby break due to real life I'm back.

I have finally decided my Adeptus Mechanicus force is going to be based on the Forgeworld Mezoa.

There a few reasons for this, firstly they have been around since the Heresy so it gives me a vast timeline to play with. There aren't pictures of their scheme anywhere so I can pick one with no issues, and as a Forgeworld they are not often used so it would be something different, especially once decaled up and looking the part.
Additionally their background suggests large numbers of Taghmata so it means I can use my FW toys in both 40K and 30k games.
Finally they have a good number of known allies, including and not limited to at least two knight households, a number of scions regiments and in the heresy several groups of Blackshields.

For those reasons I decided this was the way to go and hope to get some colour on these guys soon. 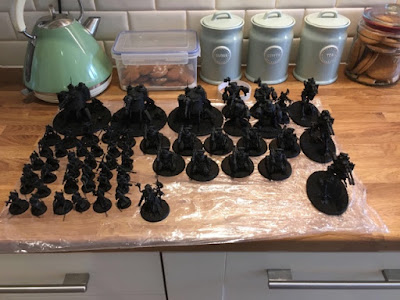 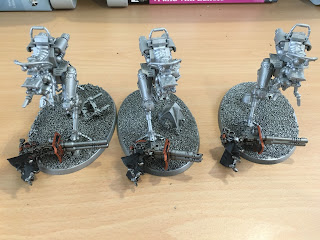 After yesterday's excitement we have new paint this week and containers confirmed for next week or the week after.

The master of machines and Lord of the brood are interesting and fingers crossed its the new enginseer from the limited Russ box and the brood Lord from DWOK.
There are a LOT of bases and basing accessories here, in all the standard sizes.

It seems though with the new basing kits and the terrain the GW are ramping up for a summer of urban combat with the cities of death campaign
Codified by Millest 2 comments:

on coming right out of the blue here and thanks to a friendly on Facebook, we have some impressive new terrain leaked on, of all places, ebay: 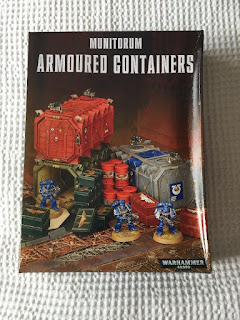 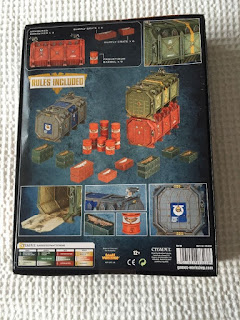 three large containers and scatter terrain, with an ebay price of £20!!!! yes please! its one of three things:
1 - gw testing the waters (the seller is in nottingham after all)
2 - an flgs has a load early and is looking to shift em
3 - an flgs is trying to get preorders up.


Now there is the off chance this is a fake and if it is first im sorry for posting but second if its a fake its a good one as it not only has the paint scheme info as per moden packaging, it also has the marines on 32mm bases and to cement if off they are from the GW studio army so its a very convincing fake if it is!
Codified by Millest 1 comment:

via JPW on facebook it appears GW and the BL have snuck a fortnightly series of Hardback books past us and on to the shelves of Newsagents, WH Smiths and Supermarkets all over the UK.

Running to 80 issues this seems a good collection but the real draw is the free gifts you get if you sign up for a subscription (that can be cancelled at any time and you could get your free gifts by the time issue 5 is out, but it has also been noted though that each "delivery" is 4 issues and those are £40 but there could be the interpretation that when a gift is with your "2nd Delivery" this isn't your second issue but your second tranche of 4 books, this makes it at least a £180 spend but then 9.99 for a Hardback isn't bad, especially to get some freebies). 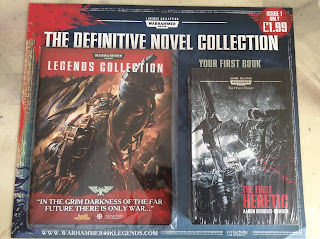 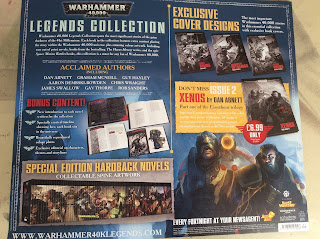 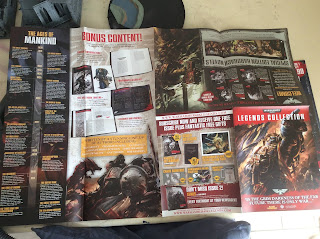 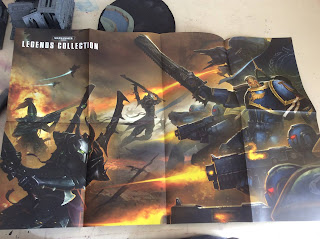 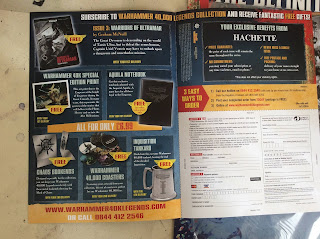 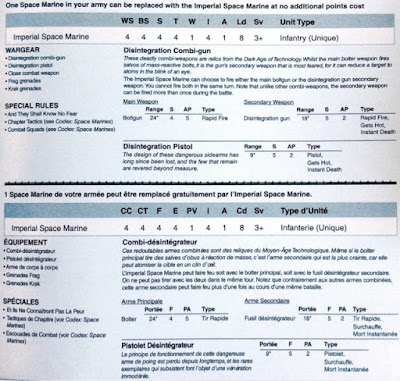 Blog Spring Clean - 2016 an attempt at a fresh start

As you may have noticed the blog has finally being spruced up and is now a tad lighter. Hopefully the changes look good to all you readers but if you have any comments or thoughts please leave a comment below.

I've taken the opportunity to remove some bits and move everything around to make things easier to find. Whilst doing this I have decided to do the same with my hobby items. Unfortunately the only things that couldn't really make the cut and be kept on were my Rogue Trader bits.
I found I had way too many models and vehicles for what I wanted to achieve and what I needed and as these are unlikely to get done anytime soon I've had a purge. If you are interested or would just like a nose around the items i am getting rid of are here:

hopefully once clear of those I will be able to get more of an opportunity to push on with the 1313th, Mezoa, my knights and another side project or two. As a sneak peak here is something i have planned for 2016 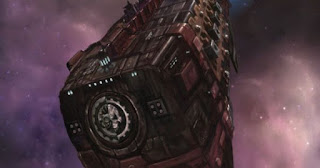 2016 - Year of the Adeptus Mechanicus

So 2016 is here and life moves on, the guard have gone on a back burner and work has taken over!

However this year we have a challenge, we have a date and we have a goal! This year myself and three of my pals are all aiming to have 2500 points ready for a 2 on 2 game at nottingham.

Initially I fancied completing my guard but I got distracted by the realms of the Adeptus Mechanicus - might have something to do the Atropos being launched when i was writing my list - and as luck would have it not long after the "Start Collecting" sets came out with a nice Skitarii bundle.

So an army was planned, a ton of boxes were bought and when I get sent away for a few weeks for work the forges of Mezoa got to work.

So far the Infantry and Vehicles (such as there are for Ad Mech) are built and awaiting painting. This equates to roughly 2000pts, the remainder of the force will be made up of a Knight, I still havent decided which pattern so have taken this opportunity to work on all three of the Forgeworld Ad Mech knights I own - more to follow on them.

The force overall is quite a decent size. 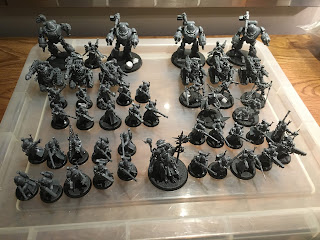 Decided we needed some Onagars so added a few. 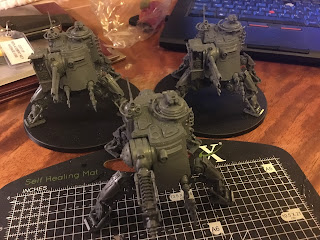 The Magos is a temporary leader for now as I have other ideas but the three squads work nicely, I decided to use Vanguard heads over the Ranger heads as I personally prefer the helmeted look. 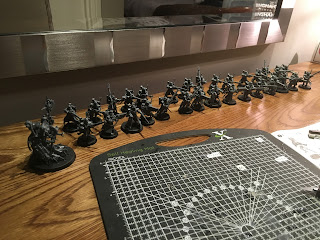 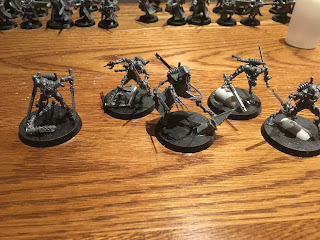 No Ad Mech Army would be complete without Battle Tractors and Robbie the robots. 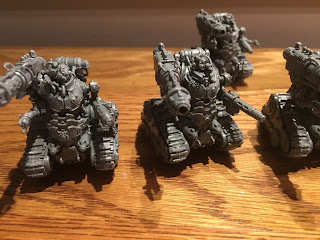 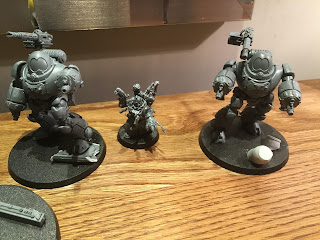 Hopefully once painted I can do the models justice and it does well on the table top. Of course the entire army is subject to change should the much rumoured combined codex come out - fingers crossed it gets me some new toys and doesn't nerf things like the battle tractors :)
Codified by Millest 2 comments:

It's worrying how well this works!