Happy New Year to you all.

Starting the year as I mean to go on and have some actual hobby progress. 2016 was good for starting new things but not for finishing them. 2017 is hoping to be the opposite.

Finally after some time off before christmas and over the christmas break I finally managed to get some paint on my Knights from House Hermetika. The plan is to get the paint completed before 1st feburary alongside my Ad Mech for our big nottingham game. My only hold back is that I wont be able to apply markings as the Hermetika and Mezoa decals dont exist - though rumours suggest they are coming. 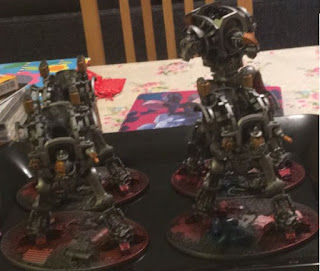 Apologies on the poor quality but once they are done fingers crossed I can get some better ones taken.

Mezoa looks fun for HH games as they seem to have had all sorts of interesting forces linked to them and present at the various points in the heresy.

Plans for 2017 include some HH ad mech, HH Ultras, more guard action and some small skirmish and imperial agents units. This of course is subject to my latest whims and obsessions but 2017 is looking like an interesting year for hobby.
Codified by Millest No comments: