I wont say anything, I will just let this speak for itself:


Codified by Millest No comments:

Imperial Fists - A Challenge in yellow Pt.2 - A Guest Post

As promised here is my follow on post, I have included not only the recipie for my yellow but also some pictures of my growing Imperial Fists Force. 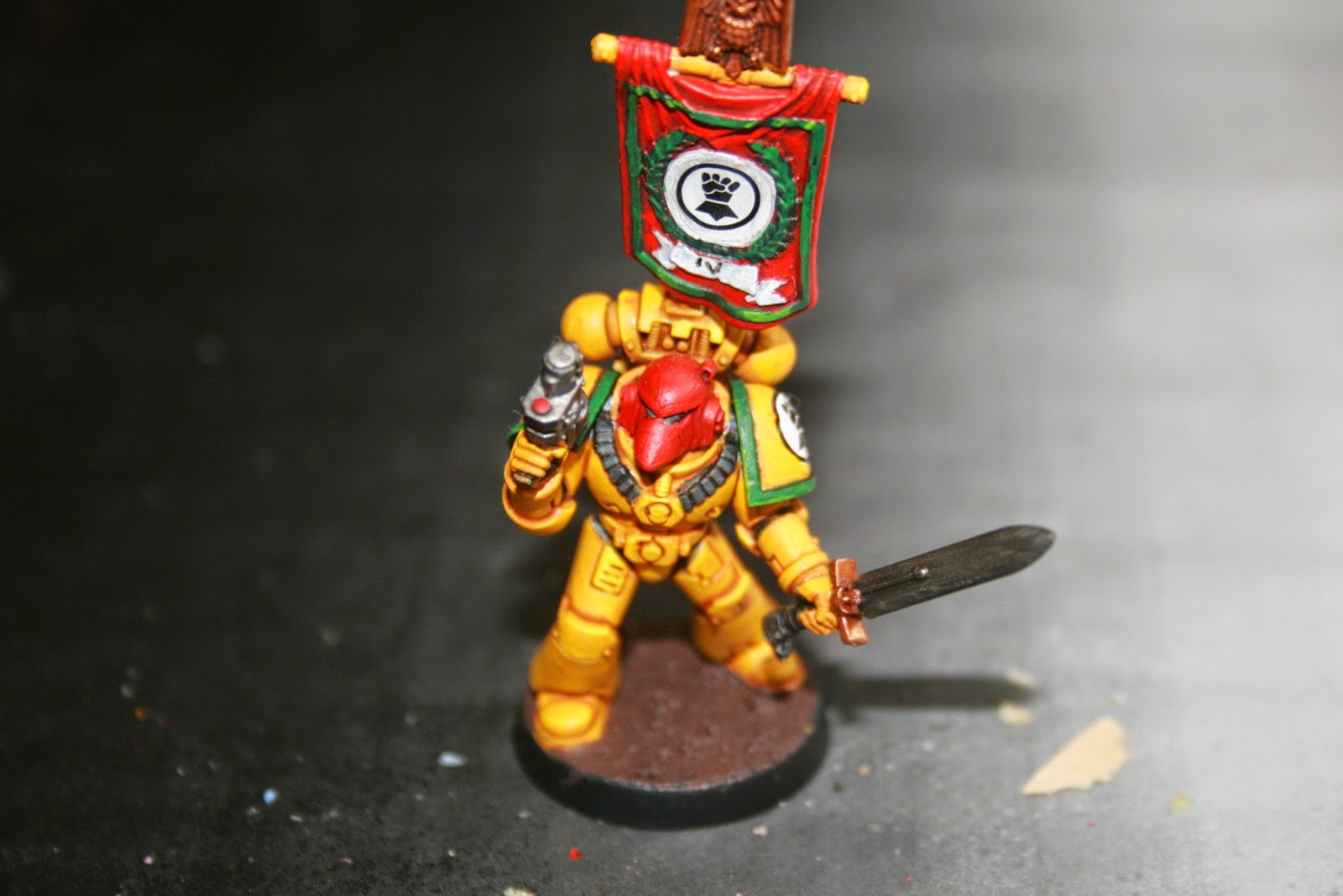 Sergeant 9th Squad - Devastator, 4th Company. Favoured armaments of Bolter and Chainsword. Not strictly rules legal, however, when I get to posting him on the forum, I am hoping they will see the tribute. 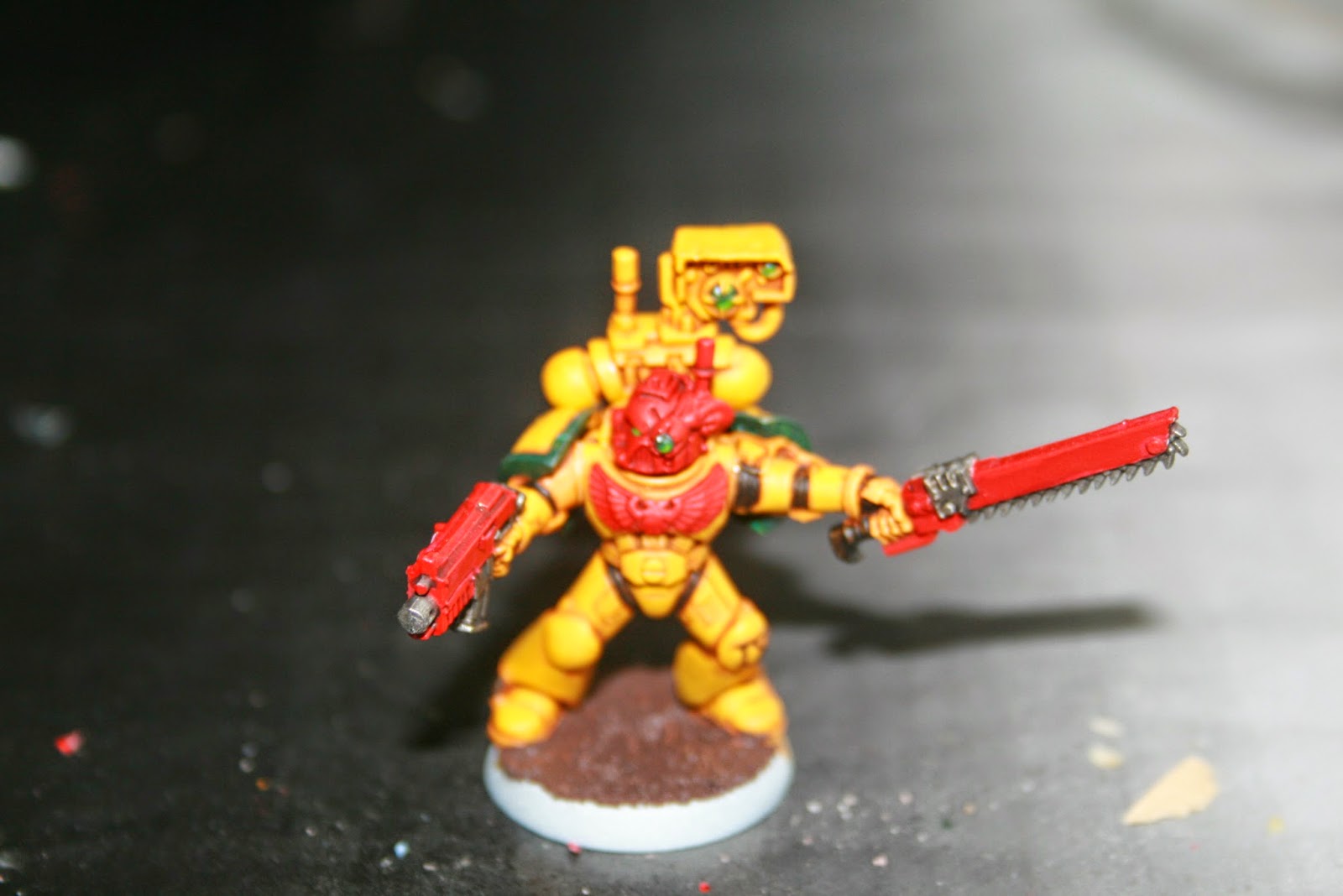 Standard Bearer, Command Squad, 4th Company. Company Banner, bolt pistol, and power fist. The freehand banner was drawn by my partner Jennie, and painted by me, in my first real attempt at painting a banner bigger than the back banners. 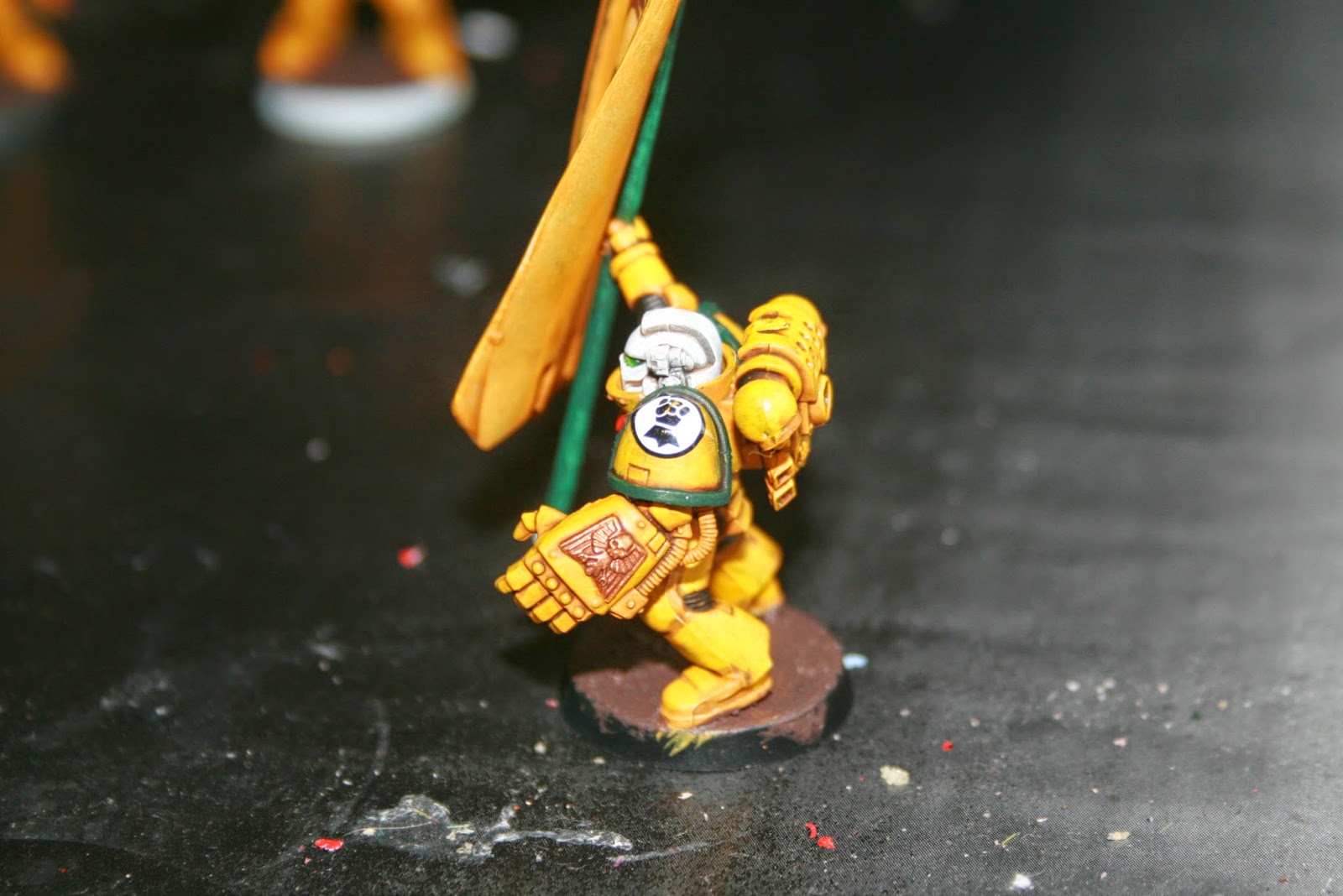 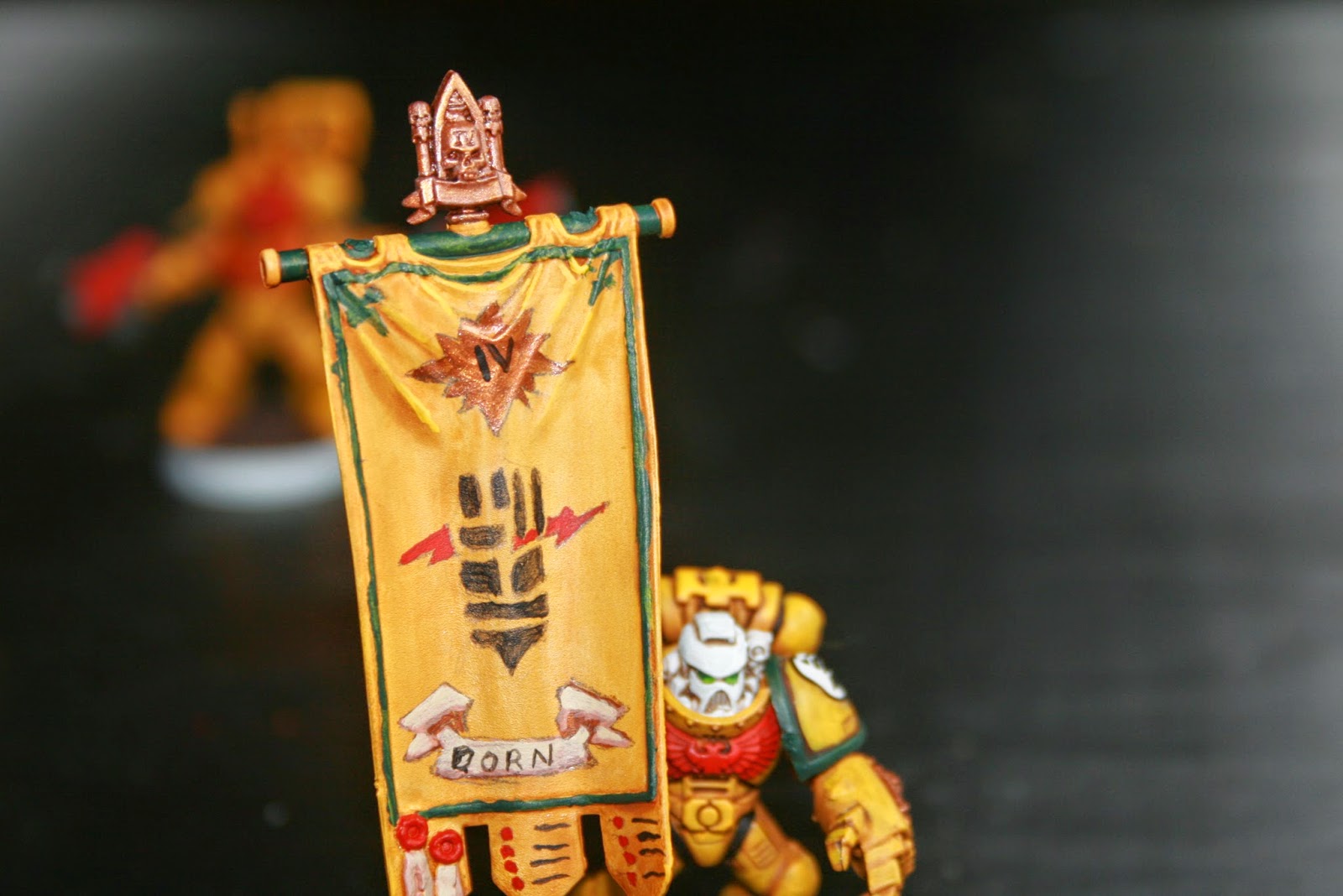 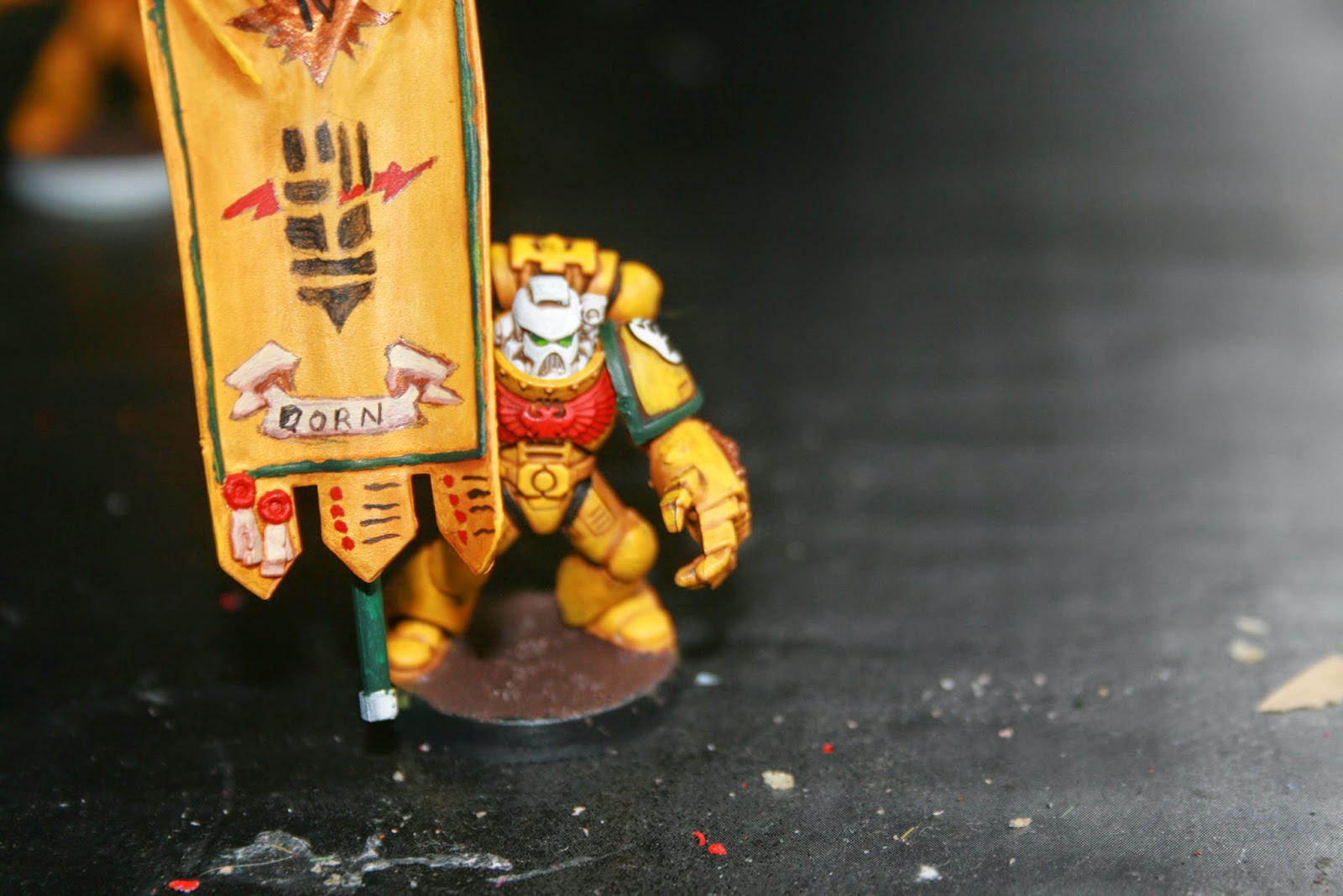 Here we have the base that all my marines have started out as. Averland Sunset over a skull white (spray) undercoat. Note, this is usually thinned in a paint to water ratio of 2:1, and applied using a decent sized brush. 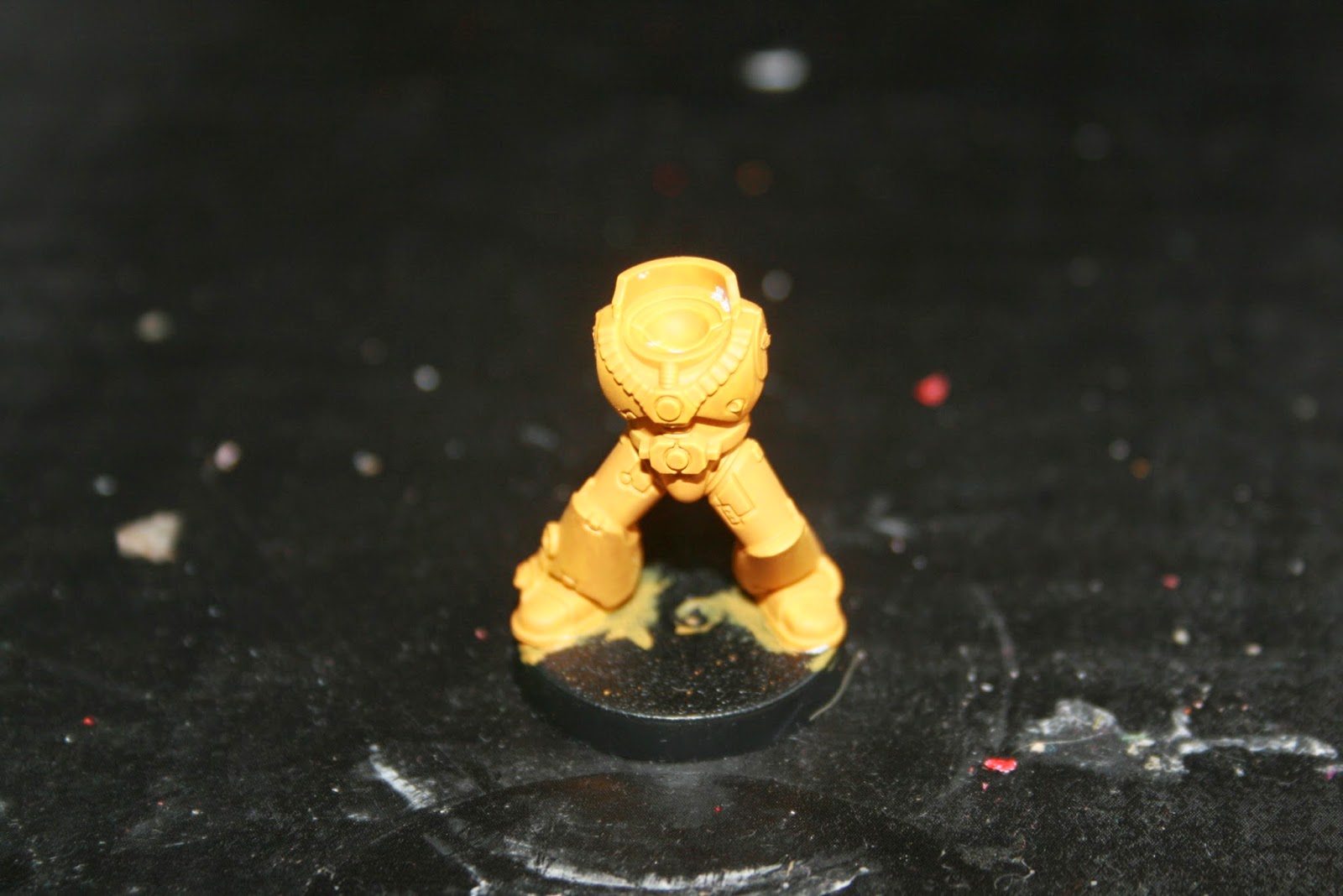 This is after the Agrax Earthshade wash. Unlike many people, I like to coat my model, as then you get an even layer on the next time round. I have, on some of the models, tried Seraphim Sepia, however, I preferred the Earthshade. 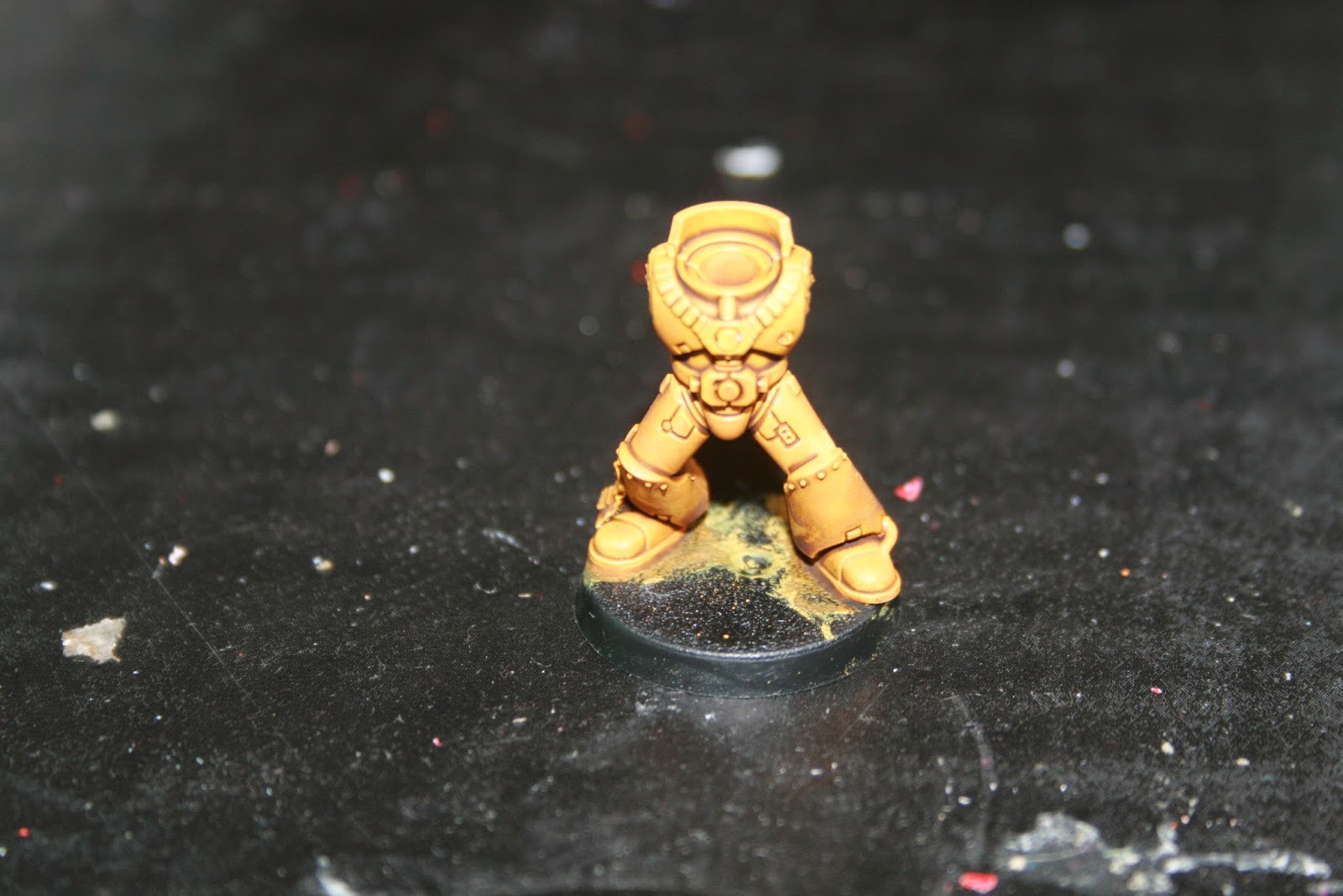 Here, Sergeant, 2nd Squad, Tactical, Plasma Pistol and Power Sword. Here you can see the next stage in the Yellow process. After the Earthshade wash, a layer of Yriel Yellow is painted on MOST of the model, as this is the stage 1 highlight. Leave the Earthshade in the recesses, and the washed Averland Sunset in the places where it makes the most sense. 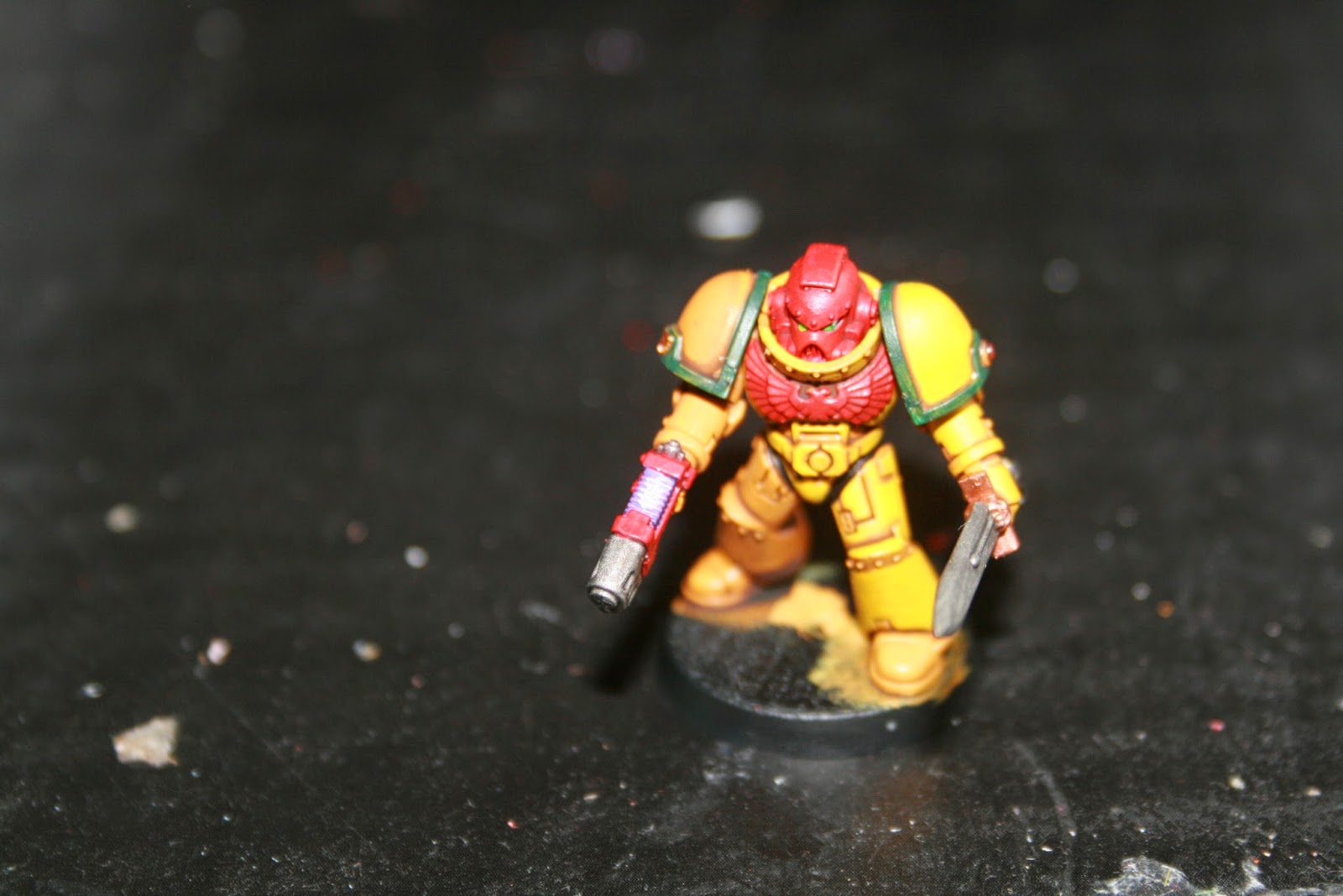 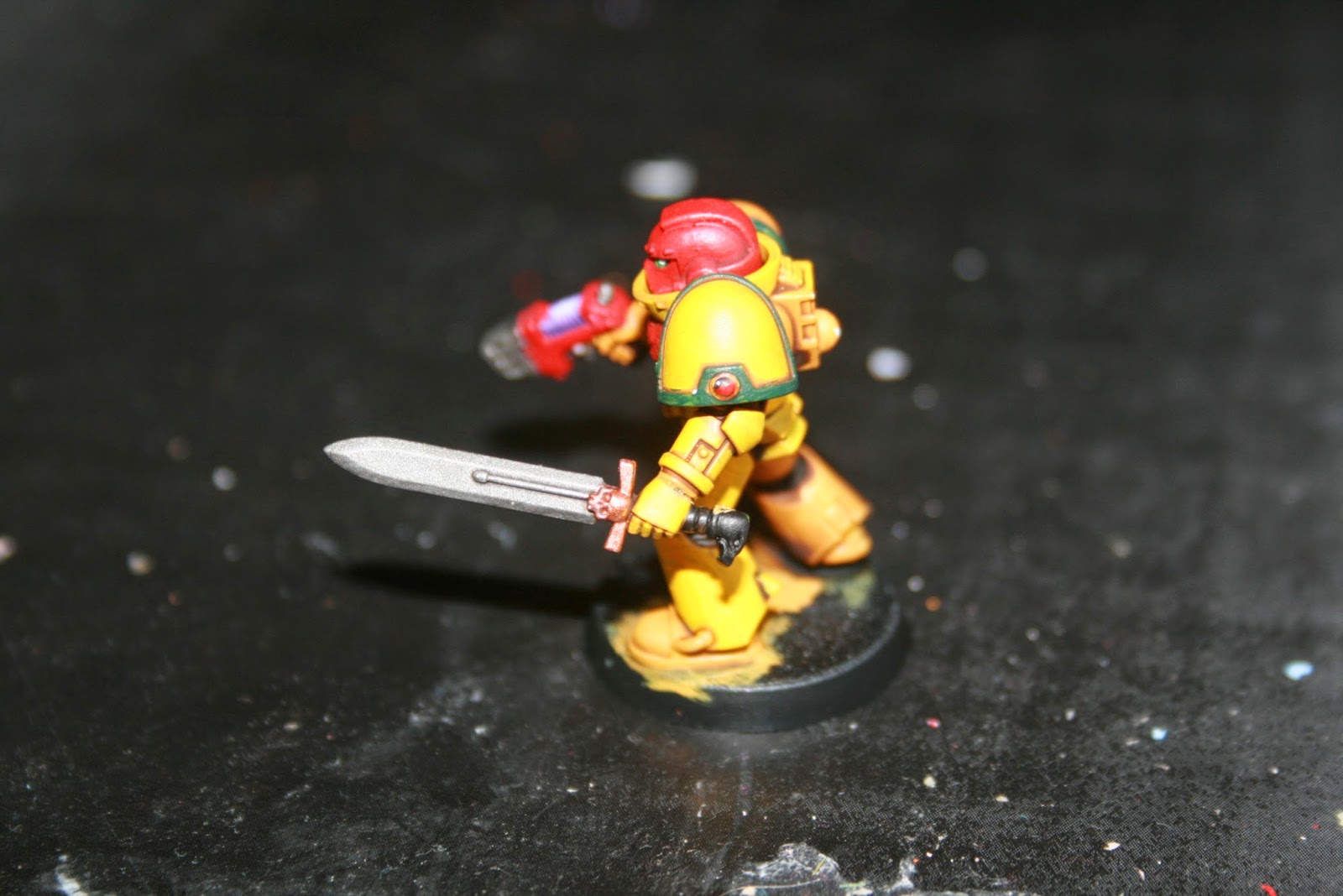 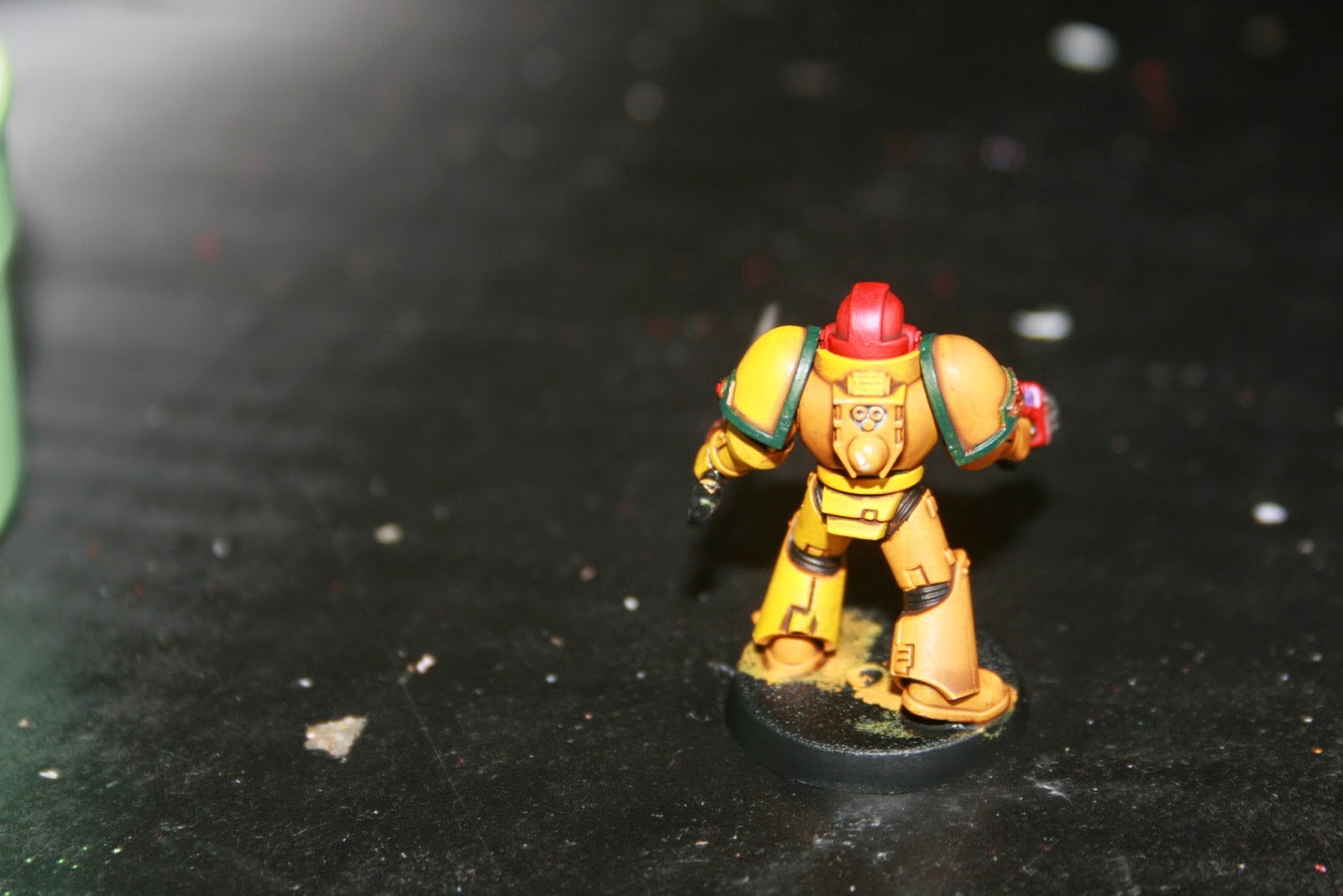 I don’t have any other pictures for the next step, but using Flash Gitz Yellow for the highest highlight point.

I hope I have made some sense to people. Just waiting for some things to turn up in the post, and I may even start to have some transports!
Ave Imperator!
Codified by Millest No comments:

Imperial Fists Captain - A challenge in yellow! - A guest post

Whilst in the midst of a move and rebuild of our new house I wont be getting much modelling done so I have decided to turn the blog over to some guest posters, if you'd like to be a contributor please drop me a line. So the first of our guest posts if my good friend Damien.

Greetings regulars, first timers, or just those who might be interested.
I come before you with a tale.  It begins with me being uninspired to continue with my favoured Dark Angels.

I received one of these from my best friend, and owner of this blog. 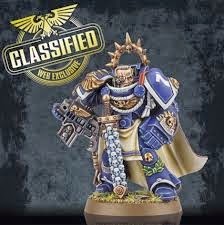 The biggest question I had when it arrived was “What do I paint this guy as?”

I already have 4-5 HQ choices for my Dark Angels, and, even though I still need to paint bone effectively, I decided I needed a challenge.

What challenge could this miniature offer such a jaded painter?  Well, I can paint green, red, blue, black, and, with some small success sometimes, white.  The one colour I have avoided like a plague is Yellow…  That’s right, I decided that I wanted to paint some Imperial Fists.

Aside from a painting challenge, they could complement my Dark Angels, by bringing units like Centurions, and the anti-aircraft tanks that aren’t in the DA codex.

So, I set clippers to sprue, and clipped out the front section, so I could glue it to the base, then clipped out sprue that was in my way, and every piece was held on by a single sprue part.  Setting paintbrush to plastic, as I had to undercoat by hand, I applied a thin layer of GW’s Ceramite White, and the painting began.

Below you can see some WIP shots taken when I was happy enough for them to be seen by others,
I have only had access to Citadel Paint, and a Citadel starter, Detail, and Fine Detail brush.  I realise there are mould lines in places, and through out the following pieces of this article.  However, for most of us, that is not only an eternal problem, but usually the worst show up far too late.
I have chosen the Fourth Company for this project, as there are loads of people who do Third Company, as they try to make the rims on the pads stand out. 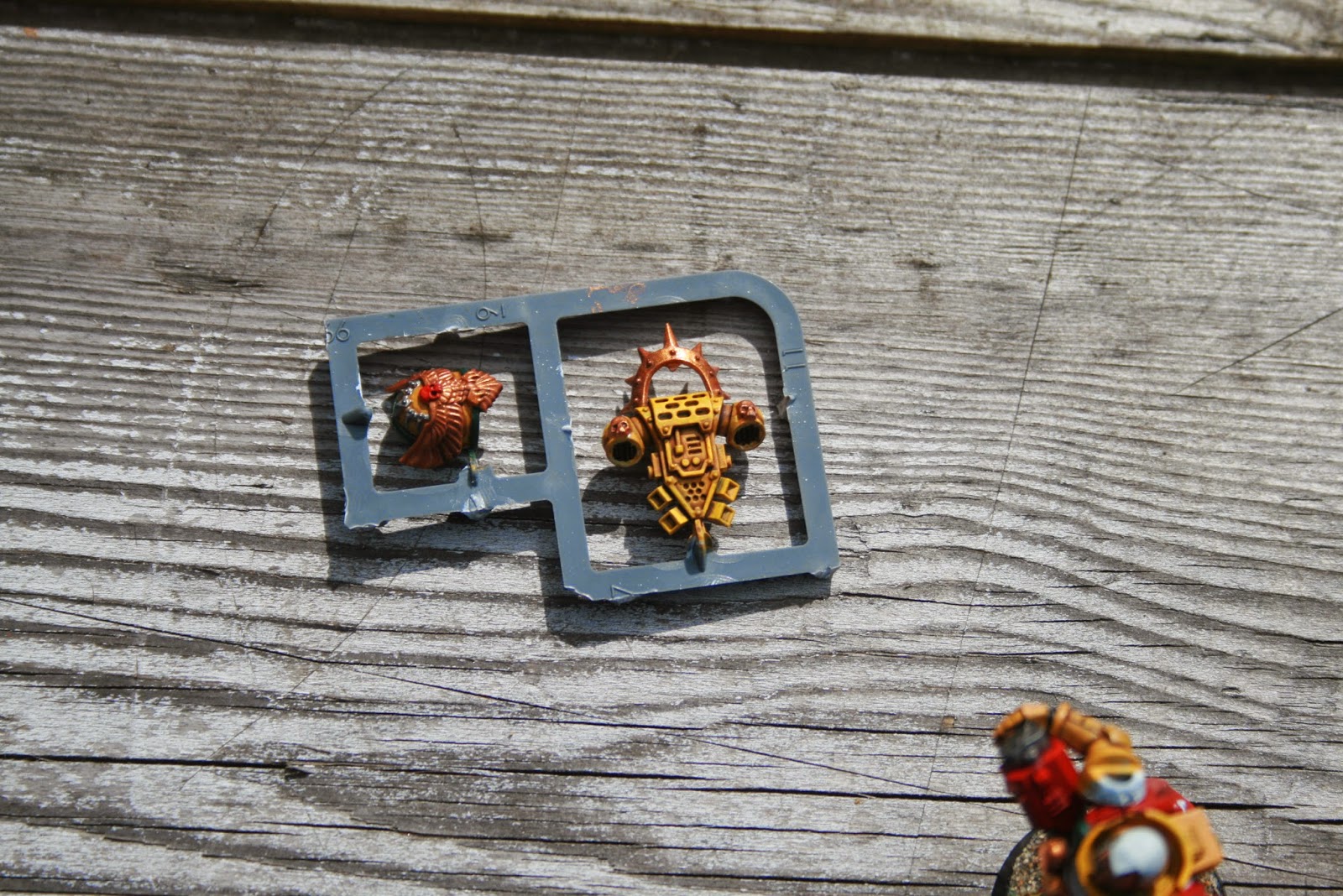 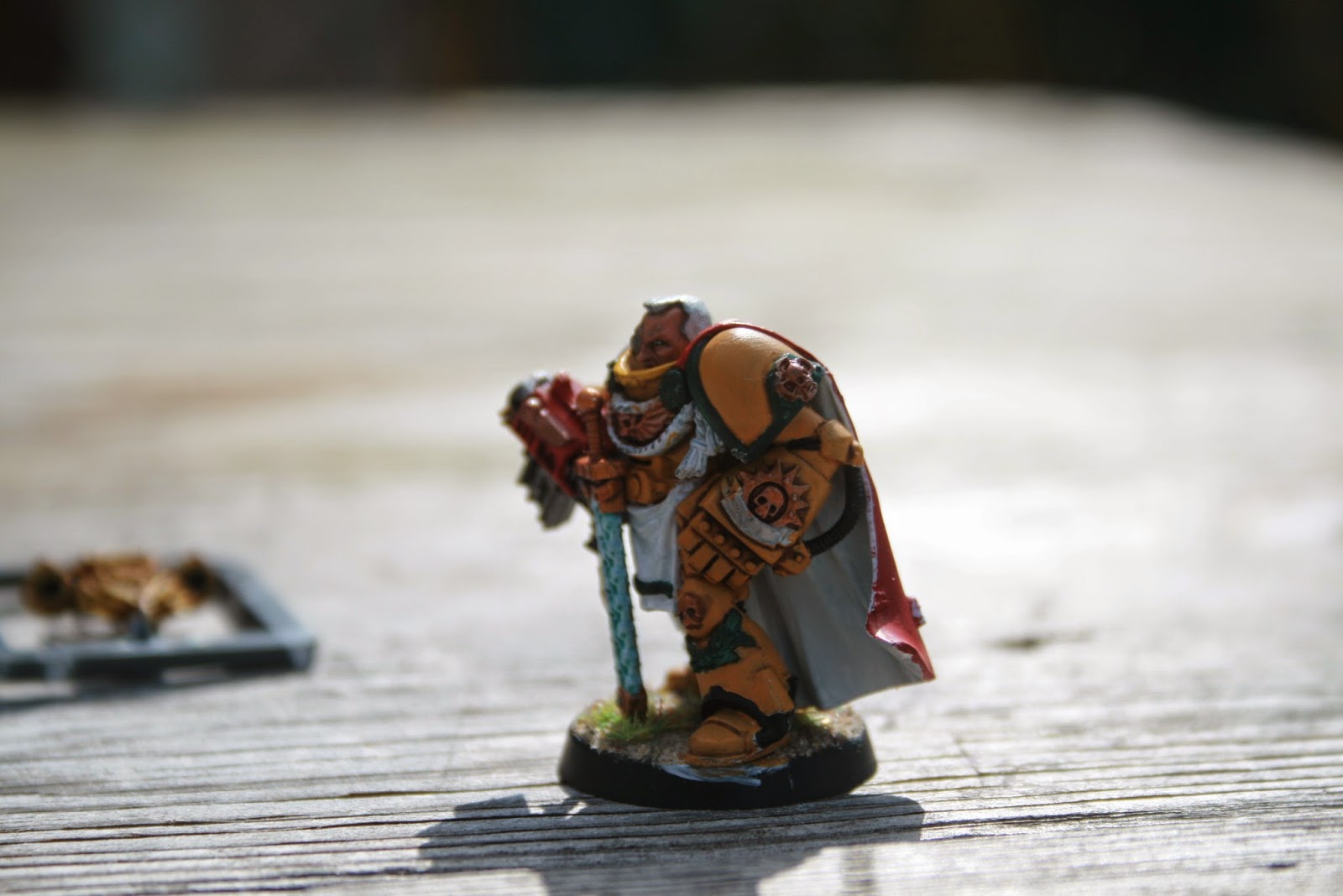 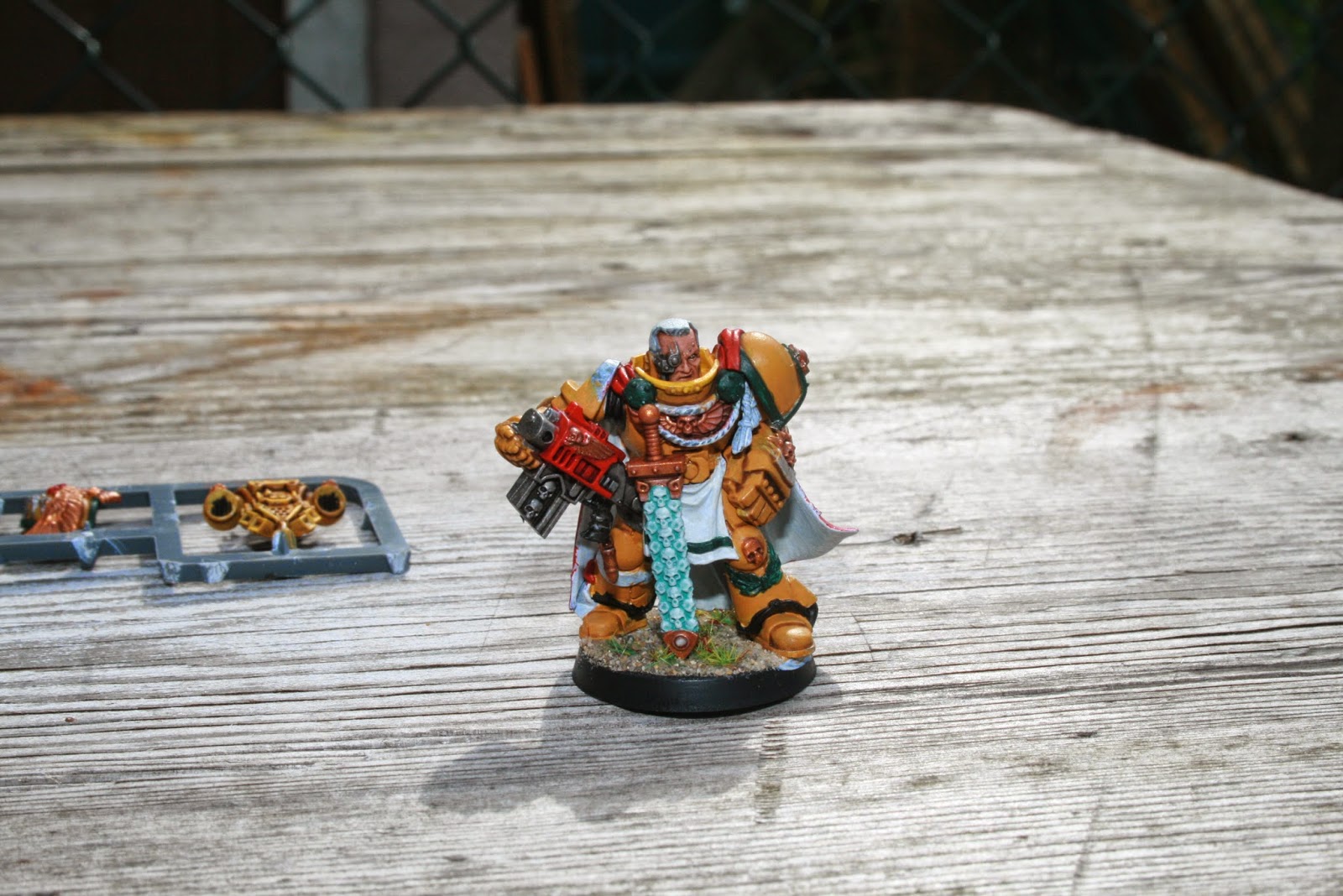 A small note here.  Many people bash the Citadel paints.  Granted price-wise they are rather steep, especially for such a small quantity, however, I have never been able to achieve such great results as I will be showing with some pictures of my Tactical Squad, Devastator Squad, Command Squad, and the step by step processes with the second tactical squad.

I have used the waterside transfers, I haven’t drilled my barrels (mainly because I don’t have a pin-vice), and I might employ some strange effects or techniques, however, I am surprised, and overjoyed by the results I have achieved.  I have never been up to “‘Eavy Metal” standard, however, there are times where I think the studio team are painting some parts of my models to torment me.

I shall include a list of colours in a follow up post, if anybody cares how things were achieved, and hopefully the step by step will be of interest to somebody else who is beginning their own Yellow Experiment.
Here is the self same captain now. 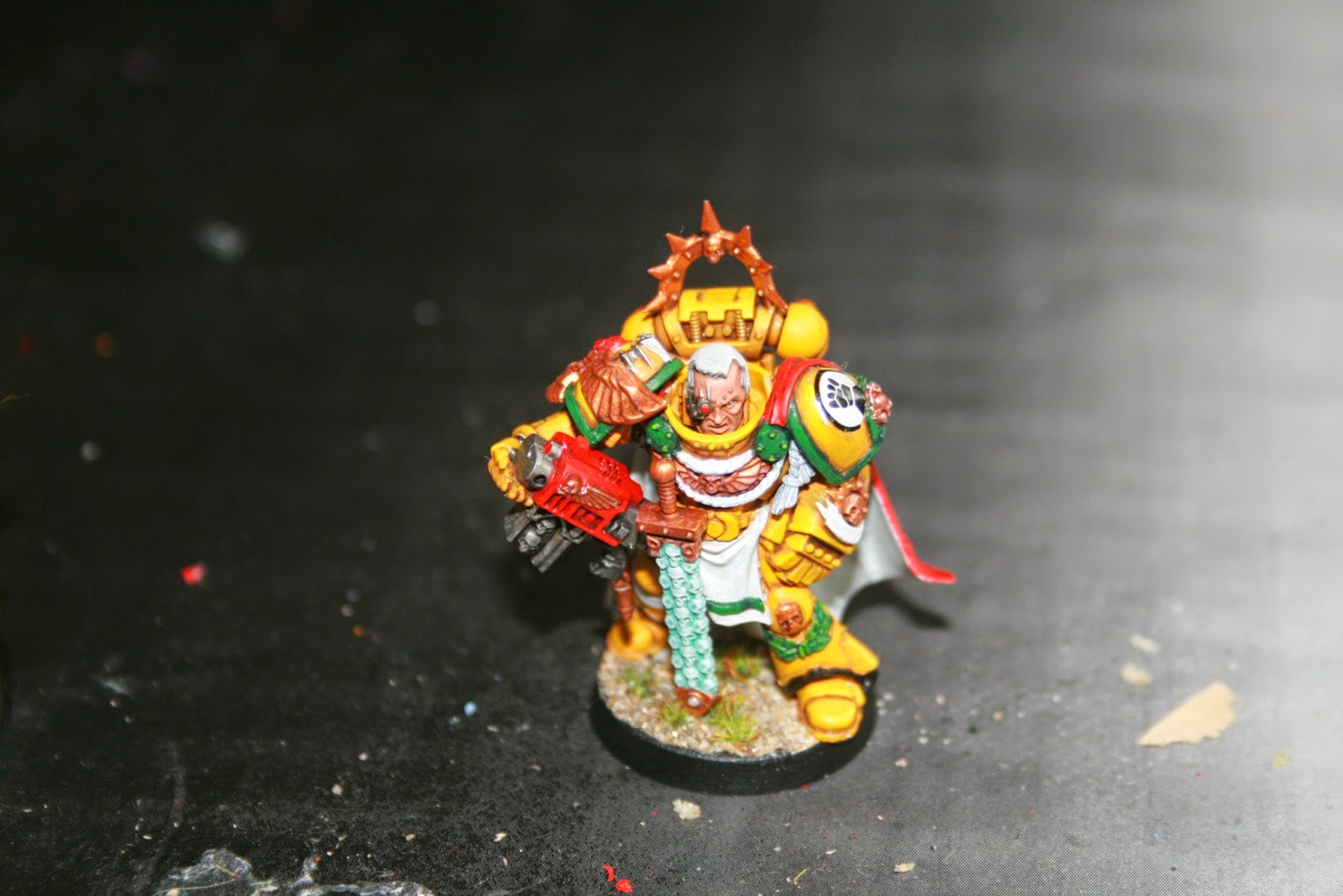 While he has some minor details that need finishing off, he is at the very least at tabletop quality.
Codified by Millest 1 comment: