Hi folks,
I'm in desperate need of imperial guard track guards (the three section buts that fit over the treads) i need complete sets please as I've come up rather short on numbers so need some to complete my armoured company.
I'm also after rhino chassis head lights and the scanners from the top of predator sponsons if anyone has them.
The track guards are most important and i have some cash available for them. these are the most important parts: 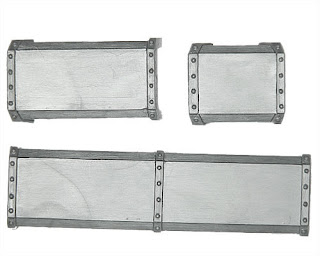 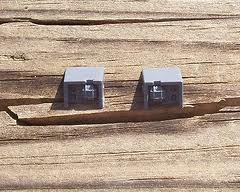 please drop me a line if you can help out.
thanks
Codified by Millest No comments:

The Terminator Armour Open Challenge - Open to all comers!

Its time for me to introduce the latest MMM challenge open to all comers, so folks as followers of the blog its time for you to have chance to join the fun.


This event is the Terminator Armour challenge! 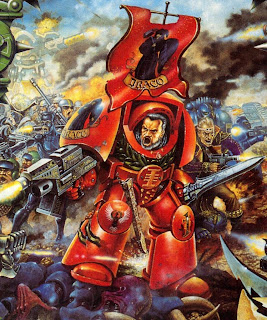 This challenge is to create a Terminator Armoured Character of your choice for an article and vote on the Millest's Mediocre Meanderings blog. Voting will be Mid June and another invite and article will be sent out for that. The Prizes are very basic I am afraid, first and most importantly is blagging rights, but secondly there will be a prize of £10 for the winner (this will be via paypal unless there is a specific store you would like a voucher for)

Rules for the challenge:
in time for the deadline you must submit the following:
any questions or comments please let me know and I will try to get them answered ASAP for you.
The deadline for submission of your starting entry is:

all entries can be passed to me using the contact MMM links on the pages here and should have "Terminator armour challenge entry" as the subject. eventually i will get the Facebook details sorted for this.

Once the 10th of May has passed (or before if you have submitted the pictures to me) painting and modelling can begin, after this completed and painted entries should be submitted by:
Saturday, 15 June 2013

The final submission should include the following:

After this point there will be a vote held and the winner will be announce two weeks after that. More details on the voting times to come.

So folks get modelling and painting and if you decide to enter, Good Luck
Codified by Millest 8 comments:

Ok, so after seeing these and contributing i was planning on writing up an article on this but to be honest citizensmith at Standard Template construct has done a far better job then i could ever do so please have a read, check out his blog here and most importantly join the latest tabletop revolution from everyones best loved basing store.
Tablescapes by Secret Weapon Miniatures article from Standard Template Construct 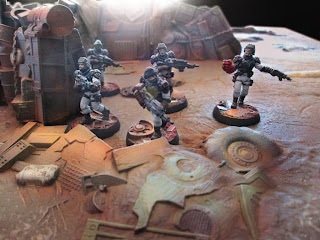 There are all kinds of cool things on Kickstarter, I've bought everything from video games to bloody mary mix (it was award winning, what can I say). Consequently it can take a lot to grab our attention on there now. In the sea of cool and interesting (and a fair bit if WTF) you have to be great to stand out.

And then Secret Weapon Minitures release information on their new Tablescapes line and lots of people get interested very quickly as boy does this product stand out. 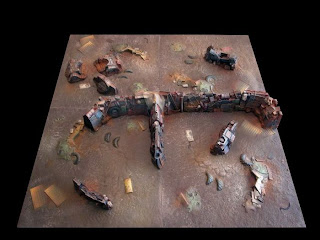 There is a lot of information available over at the Kickstarter page as many updates have been posted. As I type there have been 10 updates so right from the start you can see there is great communication. The key thing for this Kickstarter though is there is actual product to look at. This isn't one of those Kickstarters built on 3D renders and reputation.

The miniatures bits-sales business has been expanding over the last few years, Kickstarter definitely making a name for itself in the respect, and while bits have been the mainstay thus far, few companies have attempted the game-table scene, especially in the way of gaming tiles. While Forge World has their Realm of Battle line, the main and priced significantly cheaper alternative breaking into this portion of the tabletop gaming world thus far is Secret Weapon's Tablescapes.

I was actually able to get together to talk to mister Justin, the owner of Secret Weapon Miniatures, about his product, what he is offering, and what the plans are. I'd also collected a few questions and comments from the interwebs that I wanted to ask too. I didn't record it or take hugely detailed notes, but in general here are the questions asked, and a paraphrased summary of mister Justin's responses with my input from being able to play with some of these.

STC: Comments have been made about other companies tiles being bendy and having a habit of bowing. How have you avoided that?
Justin: This has been addressed by having a series of concentric braces on the back, there is no play in these tiles. The connection system is really quick and easy to use and keeps them together with no difficulty.

STC: Several people have asked for different size selections, and you have already added a 4'x6' table option on the Kickstarter. What else will be offered?
Justin: A 2x2 display board size may be offered, but because of shipping, packaging and such the per tile cost would be significantly higher. The recommended option would be a 16 tile set as there is nothing to stop you moving the tiles from display board to gaming table. Additionally there are plans for 8 tile sets of some Secret Weapon themes to be available after the kickstarter to enhance existing gets. Lastly, and to cover the games that play on a 3'x3' board, individual tiles will be sold. This way a Malifaux/Relic Knights player can buy an 8 tile set and a single tile to cover their needs.

STC: Will pledges all be from the Scrap yard theme or are there other options?
Justin: Pledges can be taken from any of the themes that unlock with the Stretch Goals. However, the scrap yard theme will be the first available. Others will be a few months behind while we get designs finalized and molds made.
stretch met as those were the first bases I ever bought from them.>

STC: Will the sets combine at all or is each an individual style?
Justin: A lot of thought has gone into the concept of combining sets and expansion packs. The same basic dirt texture will show up on a lot of boards as a unifying theme. This allows you to build a board that is half urban streets and half generic fields and have it look like it was all meant to go together, because basically it was. Additionally, you could start with Scrap Yard and later add a stock yard or warehouse theme expansion and know you'll have no trouble getting the two looking like they were meant to go together.

STC: It seems like a lot of thought went in to these, any insights on the design process?
Justin: The depth and level detail of these means a lot of time and energy went into the process to ensure we didn't short cut anything. Moving from 3D renders to a product in hand has been some work, but the quality checking it allowed us means we can avoid flaws that may have been missed as well as revise some of our design decisions to further enhance the overall look of the tiles.

STC: Where can people see these if they are interested?
Justin: As well as the Kickstarter, Secret Weapon Miniatures will be at Adepticon again, this time with some of the Tablescape tiles to show off. If you can't make it there, just listen to your favorite podcast as I'm sure a few will be covering this.

Lastly, as I mentioned, I was able to get hands on time with the whole scrap yard theme. There is only one of the 16 tiles available so far, the other 15 being the reason for the Kickstarter. It was a great thing to work with though, as it feels as good as it looks and the clip system is simple but completely effective. There is also a big line of walls and other scenery all cast in resin. These are heavy pieces, crammed full of detail, and have the same standard we have gotten used to from Secret Weapon.

We'll wrap up with the bases as these were what got Secret Weapon started. These too have a ton of detail on them as do all his bases. As good as they are the thing that really sets them apart from his other great bases (Like the Tau Ceti bases I'm painting) is that they will match your table. How cool is that?

Hi folks
apologies for the quiet blog the past month, work and real life have prevented any hobby action apart from a game of airsoft a month ago. Hopefully there will be more coming over the coming weeks.

So please bear with me as I work through a very difficult patch on the road of life and once the blog returns to full strength it will be a glorious start. Stay with us and get prepared for a new modelling and painting competition coming to the blog soon.

Also if you would like to guest post, have a suggestion for a post or just want to air a view feel free to drop me a line or comment and we shall see if we can work it in to the plans.