Hermetika Walks - Risen from the Forges

Bolstered by the power of the machine Ro-Lep felt something unacustomed to one of his kind, Pride!
Emotion was something in short supply amongst the Skitarii Contingent of Mezoa. However as the Red sheened Knights of House Hermetika positioned themselves around his cohort in defiance of the Eldar host facing them, the almost too human emotion of pride was the only thing he could equate the odd chemical imbalance in his brain to.

These weren't the walkers of the Titan legions, the God-Engines of Mars, no these were something more primal. Closer to the man he once was, in his humble (though possibly illogical) assessment the Knight Warriors were a perfect amalgam of machine and a single man.

Gleaming red for the Glory of the Machine-God and silver for the metal of Mezoa they rose above the Skitarii ranks. This unaccustomed pride at being able to fight alongside these Avatars of the Machine made him do the unthinkable, he took a knee and joined in the cant: 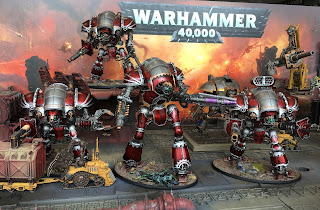 The Knights of House Hermetika are my first attempt at painting with an airbrush and I am surprised by the outcome. I used the techniques in the Forgeworld Horus Heresy Masterclass book. I slightly modified some of the techniques to fit with the look I wanted and overall very happy. Some of the techniques are almost counterintuitive but are super effective, I highly recommend the book.

Finally though in to all those detail pictures I have been promising for ages! First up we have the glorious Knight Atrapos "Terminalibus Gravitas" (Terminal Gravity) striding over the fallen corpse of the enemy. 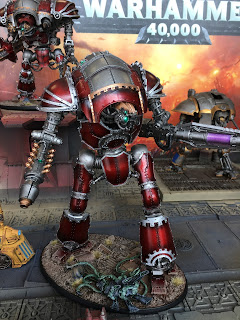 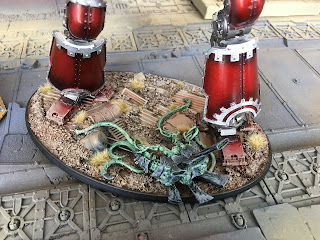 The purple effect on the giant lascutter was remarkable simple, just light silver with a Forgeworld Eidolon purple sprayed over the top, the green of the Gravition cannon was done in the same way but with the Mortarion green brushed in to the recesses. 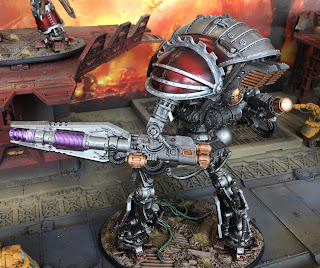 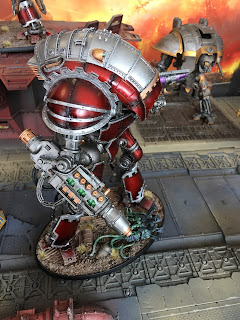 Next is the Questoris Knight Magaera "Fulgar Scientia" (Science of Lightning) patrolling the workshops of Mezoa. Painted in the same vein as the Atrapos with a limited pallet of reds and metallics and Games Workshop gem paints on the lenses. 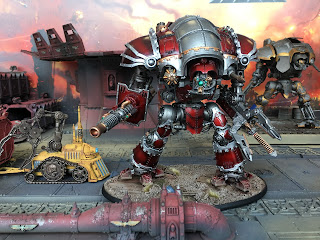 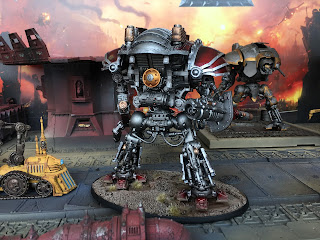 Next is the Questoris Knight Styrix "Maligni Indicies" (Indices of Malevolence) joining its fellow knights in patrolling the workshops of Mezoa. 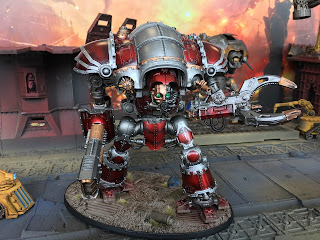 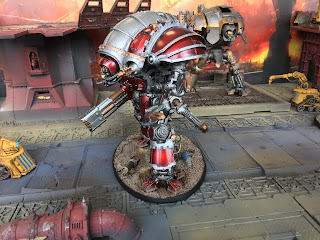 Finally we have the Knight Warden "Rationes Exitium" (Calculations of Destruction) joining its fellow knights in patrolling the workshops of Mezoa. 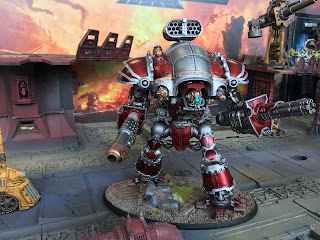 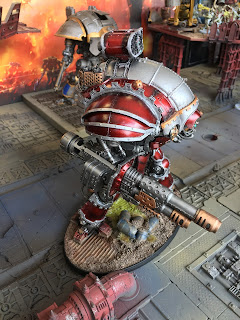 Armed with the Nelanton pattern rapid fire pattern battle cannon and gatling cannon the fire power from the "Exitium" is enough to make even the toughest foes think twice before advancing. 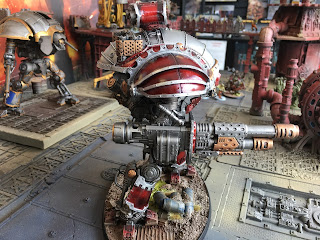 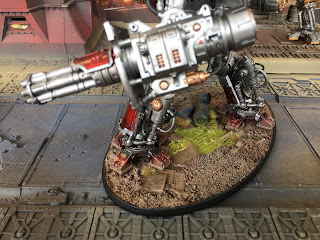 The bases used for these models are the Secret Weapon Scrapyard bases, all have been modded in some way to increase the variety and hopefully help tie the forces together.
Codified by Millest No comments:

So finally got chance to start playing with some of the Primaris marines and decided making them Deathwatch Marines would be good fun (and fairly simple as it turns out). 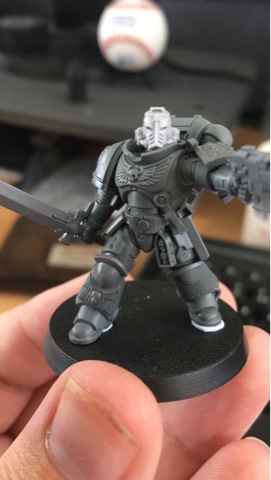 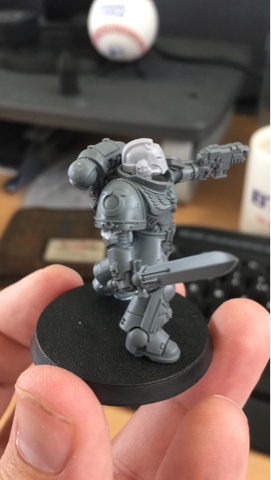 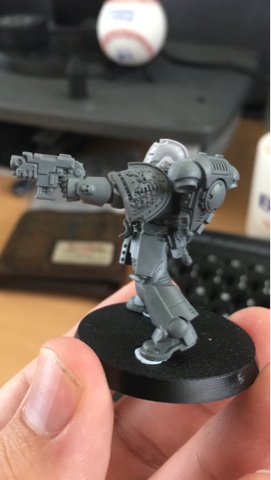 Next is Veteran-Brother Drakin lately of the Red Hunters prior to elevation to the Deathwatch.
Again simple head swap with a Vanguard Veteran head and shoulder pads, the Shapeways Red Hunters pad is very nice and fits well.
Finally is his Infernus Heavy Bolter (hes going to be the only Primaris in the squad so thought it would be nice to use it as a counts as). Whilst not quite finished is a normal Cawl Bolter with the barrel repositioned and the nozzle and tank from a Forgeworld hand flamer. 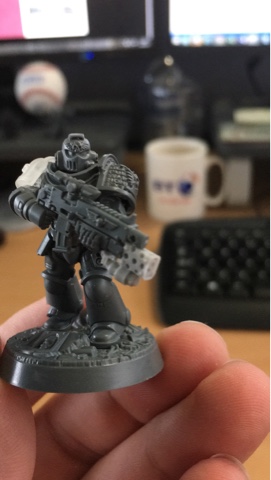 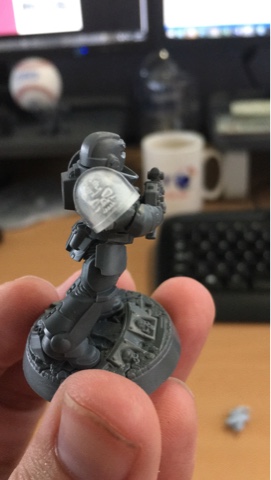 hopefully soon I will be able to get on with my actual Primaris marine force but the Ad Mech are the main concern at the moment.
Codified by Millest No comments:

Finally a hobby update, after recent time away for work has allowed the ranks of Mezoa to be reinforced.

Joining the ranks of the Forgeworld are a nice block of nearly 50 models. We have a unit of Vanguard, 2 units of Peltasts, Hoplites, all three of the Games Workshop Enginseers (a nice mix of metal, finecast and plastic models in those three!) and a little side project Skitarii figure for Shadow War, more to come on ++01010011 01101100 01111001++ at a later date.
All have being metalled and washed prior to the detailing but given work hopefully it wont be too long before they fully join the ranks of Mezoa. 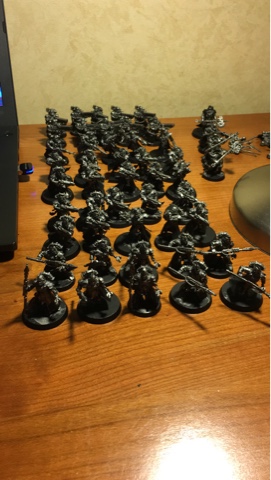 In addition to the painting there was some actual terrain built for our small gaming group.
Back in 2010 or 2012 (that long ago I cant remember) I won a competition for some warmill vouchers and ended up getting some of the Hab Pods (found here: Hab Pods) and have finally built them.
The models were suprisingly easy to build and importantly didnt actually need any glue to hold them togther. I think they work well as a small Ad Mech outpost for some of the smaller games we are planning. 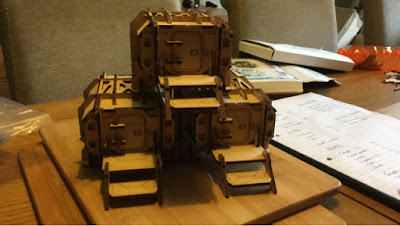 in addition to the pods I finally got to build some of the Shadow Wars terrain at last. Overall very impessed with it as its flexible in its fit and is very well cast and built. 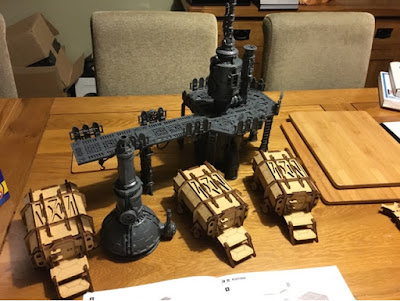 All this terrain and more is aimed for either flat table gaming or use on this bad boy one of the lads in the group has gone and bought - I cant wait til the terrain is done and ready to be used. 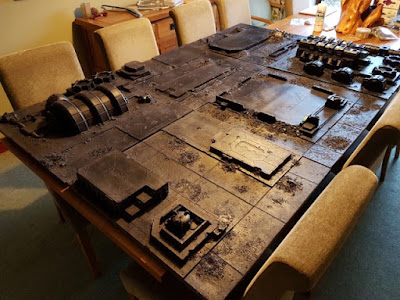