Minotaurs Character Set – Asterion Moloc and Ivanus Enkomi
The name of the bloody-handed and paranoid master of the Minotaurs Chapter, Asterion Moloc, is a byword for slaughter and destruction in the name of the Imperium across a hundred worlds, yet he is also a diligent and disciplined logistician and a master of siege craft. In battle he can most often be found at the head of his 1st Company Terminators, and when not prosecuting a conflict he occupies a brazen throne at the very heart of his flagship, the labyrinthine heavy assault carrier Daedelos Krata. 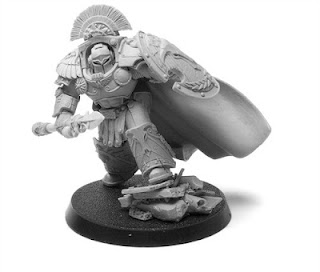 The gaunt and brooding Reclusiarch Ivanus Enkomi became the eyes and voice of his master during the Badab War; an aloof and distant observer at Carab Culln’s war-councils. A paradox, whose red-irised eyes and crimson-tattooed features speak of some feral origin, yet in whose voice lies a capacity for fierce and stirring oratory, Chaplain Enkomi is a skilled tactical commander, most notably during the Loyalist attack on Shaprias that uncovered the black depths to which the Tyrant of Badab’s treachery had sunk. 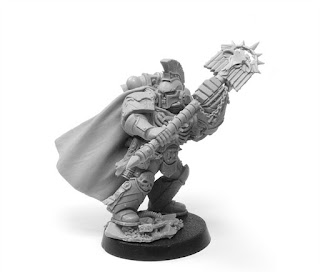 Asterion Moloc and Ivanus Enkomi, designed by the talented Simon Egan, are incredibly detailed multi-part resin figures available as a set of two models. The set is available to pre-order now for despatch from the 2nd April, and rules for these special characters can be found in Imperial Armour Volume 10: The Badab War Part 2.

Space Marine Rapier Laser Destroyer
The Rapier Armoured Carrier is an ancient device, one of many such technological relics of the dawning days of Mankind’s stellar empire. A bulky, armoured track unit, which mounts a powerful antomantic reactor, the Rapier is often armed with a powerful quad lascannon known as a laser destroyer. This has become synonymous with the Rapier Armoured Carrier itself, and the Graia Pattern Rapier Laser Destroyer is perhaps the most common design of this potent anti-tank weapon in use. 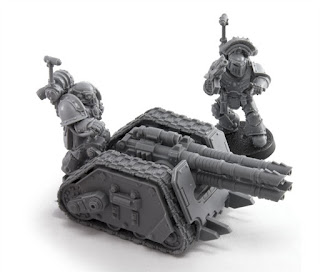 The Space Marine Rapier Laser Destroyer is often deployed by many Space Marine chapters, especialy those descended from the Imperial Fists and Iron Hands Legions, and is widely used during Boarding Assaults and in the close and deadly confines of Zone Mortalis. Designed by Mark Bedford and Will Hayes, this multi-part resin kit is supplied with two Space Marine crew in MkIII ‘Iron’ Armour and is available to pre-order now for despatch from the 2nd April. Experimental rules for the Space Marine Rapier Laser Destroyer are available to download from the Forge World website now.

Forge World Open Day, 1st April, Warhammer World, Nottingham
Event Only Imperial Enforcer
The Forge World Event Only model for 2012 is a grizzled Imperial Enforcer, designed by Steve Whitehead. This finely-detail multi-part resin kit contains two figures. The Enforcer, armed with a shock-maul, is clad in light carapace armour adorned with the icons and trappings of Imperial justice, preparing to let slip the Cyber-Mastiff accompanying him; a great and menacing hound-servitor, a canine rebuilt stronger, faster and more resilient by the tech-savants of the Adeptus Mechanicus with adamantium bones, fangs and claws. 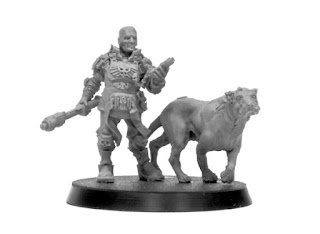 Event Only Skin Wolf
The Warhammer Forge Event Only model for this year is a brutal Skin Wolf, designed by Keith Robertson. This detailed multi-part resin model depicts a towering and savage hulk of muscle and rage, howling its bloodlust having slaughtered a hapless Imperial state trooper. The Event Only Skin Wolf is packed with detail, from the stigmata of Chaos branded into its flesh, to the tattered ruin of its victim, and comes supplied with an alternate, empty, left hand for additional modelling options. 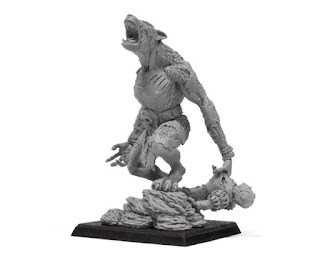 These fantastic models will be available to purchase at all of our 2012 events, starting with the Forge World Open Day. We are not accepting Open Day reservation orders for the two Event Only models, and they will be limited to one of each per person on the day as usual.

Forge World Studio Displays at the Open Day
The entirety of the Forge World and Warhammer Forge sculpting teams will be attending the Open Day, showcasing all manner of hidden secrets, work-in-progress models and recent releases. Stuart Williamson, Daren Parrwood, Will Hayes and Phil Stutcinskas have recently been hard at work on a variety of Warhammer 40,000 models of a variously armoured, flying, and walking nature; all these and more will be on display in our Studio area. Meanwhile, Mark Bedford, Edgar Skomorowski, Keith Robertson and Steve Whitehead have been busily designing monstrous additions to our Warhammer Forge range, and rumour has it there may even be some work-in-progress future additions to our Chaos Dwarfs range on display too.
The Book Design team, headed by Paul Rudge, will also be based in the Studio area. Rhys Pugh, Ian Strickland, Kenton Mills and Sam Lamont will be showcasing the process by which an Imperial Armour book is created, and may even be seen working on artwork for future book projects on their advanced cogitator devices. Lead writer Alan Bligh, accompanied by Talima Fox and Neil Wylie, will be on hand to talk about forthcoming books. They may even be tempted into dropping a few hints about mysterious future projects…
There’s still time to place reservation orders for the Forge World Open Day, which is the best way to ensure we have the exact product you want, packed up and waiting for you at the event. As with all our UK shows, Open Day reservation orders are pre-paid to make the collection process quicker and easier, leaving you with more time to enjoy the rest of the event.
Please telephone the Customer Service team on 0115 900 4995 by 6pm on 28th March to place a reservation order. We will require your name, a contact telephone number and e-mail address along with the list of products you wish to reserve, and you will need your card details to hand. We’ll process the payment while you are on the phone, and in the week before the event you’ll receive a confirmation e-mail containing your order number. This is your proof of payment, and you must bring a copy of this e-mail with you to claim your order.
You can download a map of the event from the Forge World Events page. The Open Day runs from 10am to 4pm, and the full range of Warhammer World facilities will be available including snacks and refreshments from Bugman’s Bar.
Thanks, Ead Brown Customer Service Manager Forge World