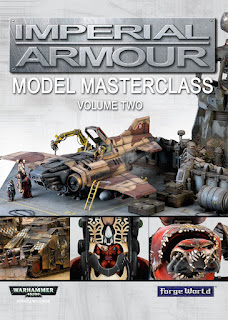 Whether you’re building and painting a centrepiece model for your army or a detailed diorama for display, Imperial Armour Model Masterclass Volume 2 is packed with innovative techniques to help you create stunning models.
Among others, you’ll find construction and painting articles on models such as the Imperial and Chaos Reaver Titans, the Great Brass Scorpion and the Crassus Armoured Assault Transport as well as in-depth construction guides focussed on our display tables such as ‘Encounter at the Balmaeus Ice Mines’, built alongside Imperial Armour Volume 11: The Doom of Mymeara (which you’ll be able to see in all its splendour at the Open Day).
The book also contains detailed galleries of some of our iconic models, including the Vulture Gunship and Keith Robertson’s fantastic Saim-Hann Phantom Titan bust.
This 144-page, full colour hardback book contains a plethora of informative articles, stage-by-stage guides, lavish galleries and inspirational models from the talented painters and modellers of our design studio, making this book a feast for the eye and the imagination as well as a practical resource as well.
It is the second Forge World book dedicated to the methods, materials and techniques required to achieve the highest possible results in terms of quality and realism when building and painting Warhammer 40,000 models.

Deimos Pattern Predator Executioner
The Predator is a highly effective medium tank designed to provide Space Marine detachments with heavy fire support in the heat of battle. An ancient and revered design, cited by the Codex Astartes as a spiritual mentor, no less, there are almost as many patterns of Predator as there are of the ubiquitous Rhino hull it is based upon. One such variant is the Deimos Pattern, manufactured in the vast forges that occupy the moons of Mars. 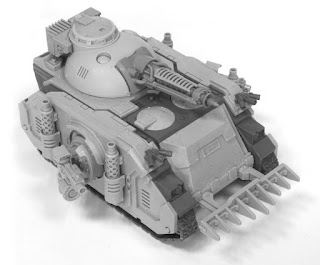 The obscure Deimos Pattern Predator Executioner is significantly rarer than the Annihilator and Destructor, for the Adeptus Mechanicus hoard their secrets jealously in the dark days of the 41st Millennium. Some even go so far as to whisper that it is a sinful pattern born of the tech-heresy of innovation, although it is known to date from the shadowed days of the Scouring. 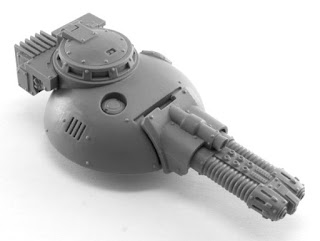 The potent firepower of a Plasma Executioner is the default armament of this war machine, bolstered by the usual Heavy Bolter or Lascannon sponsons. The main gun can be replaced with a Heavy Conversion Beamer, although the additional power drain of this arcane and ancient device precludes the addition of Lascannon sponsons. Such devices
Designed by Will Hayes, the Deimos Pattern Predator Executioner is a multi-part resin and plastic kit containing two turret weapon options and two sponson weapon options. It will be available to purchase in limited numbers at the Forge World Open Day on Sunday 1st April in advance of its scheduled release date, and will cost £46

Chaos Decimator Weapons
Inquisitorial  savants do not know for sure what unknown and malefic party are responsible for the sinful innovation of the Decimator Daemon Engine, which is capable of fielding a wide range of armament; arcane conversion-beam generators, great multi-barreled Stormlasers, the reality-altering heresy of warp-tainted Soulburners and great raking Siege Claws to name but a few. 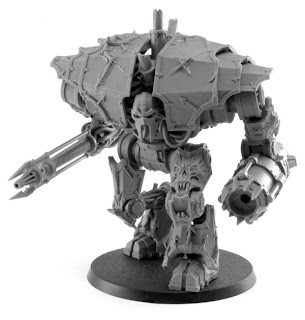 Towering over even the mighty, and exceedingly rare, Contemptor Pattern Dreadnoughts of the Adeptus Astartes, the Decimator is believed to be an attempt to bolster the ranks of such ancient devices that still serve the Traitor Legions on the part of the shadowed, now near-mythical, Legio Cybernetica. If this is the truth, then the warriors of the Imperium may well yet tremble before the might of this colossus.

Two more detailed resin weapon options for this fearsome Daemon Engine will be on sale at the Forge World Open Day in limited numbers, well in advance of their scheduled release. The Decimator Soulburner and Decimator Heavy Conversion Beamer, designed by Daren Parrwood, are finely detailed resin weapons for the recently-released Decimator Daemon Engine, experimental rules for which can be downloaded from the Forge World website now.