Hi folks, so the new year has been here for a while and now its time to start with some hobby fun. Since December and life changing for the better I have been on a bit of a retro funk and have indulged in many culinary delights, music marvels and video failures from my youth. Until recently however one thing has always eluded me due to time and costs, that slippery weasel is the joy of the hobby days of my youth!

So trawling through facebook I discovered I wasn't the only one pining for the modelling days of yore. In my travels of the book of face I came across the Oldhammer Community who are a group who share my interest in older models from both 40k and WHFB. So on joining the group and spending some time mooching around I rediscovered this art work and fell in love all over again. 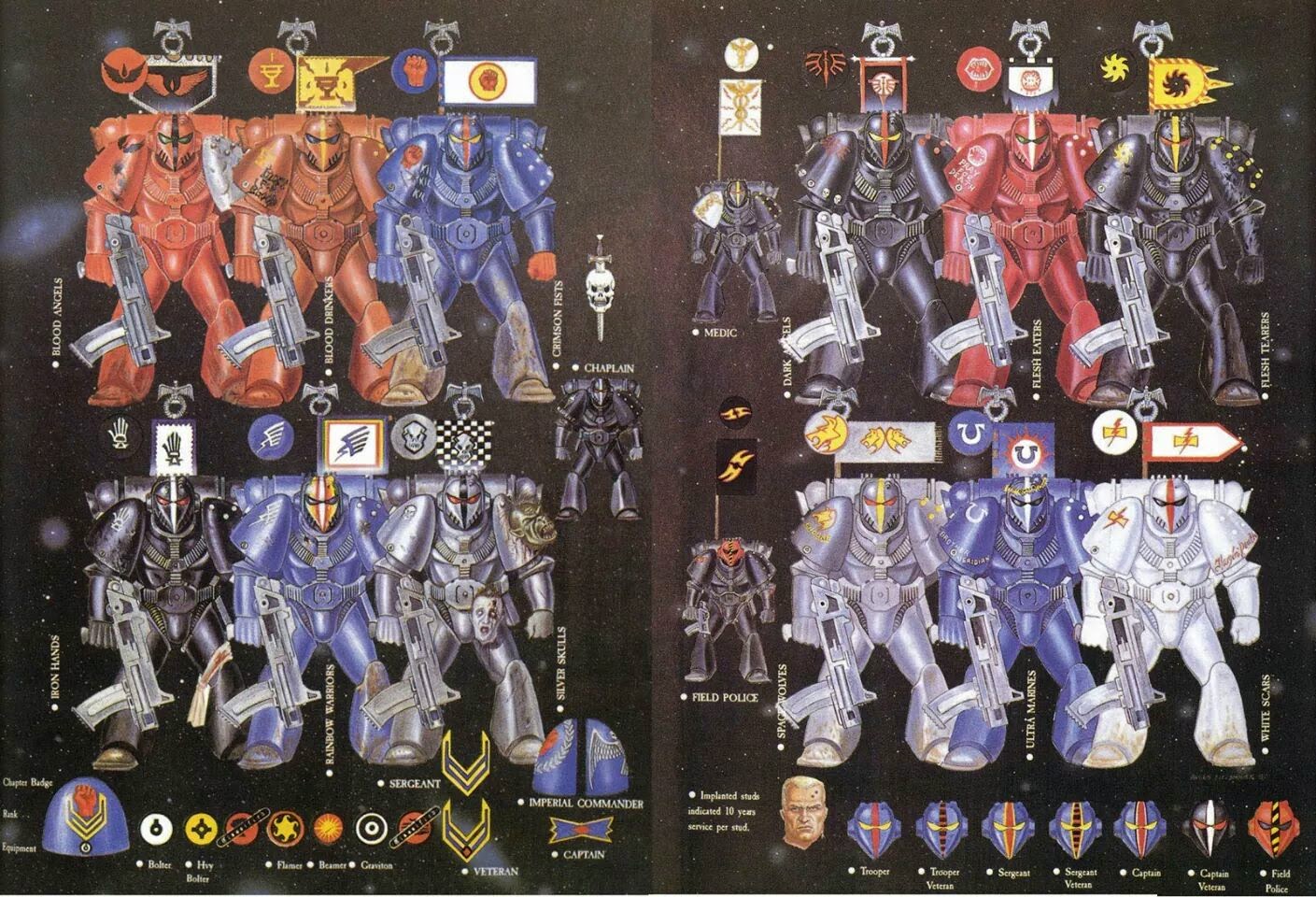 possibly the most iconic page from the old red book this page is to blame for me starting the hobby and has always been a favourite. 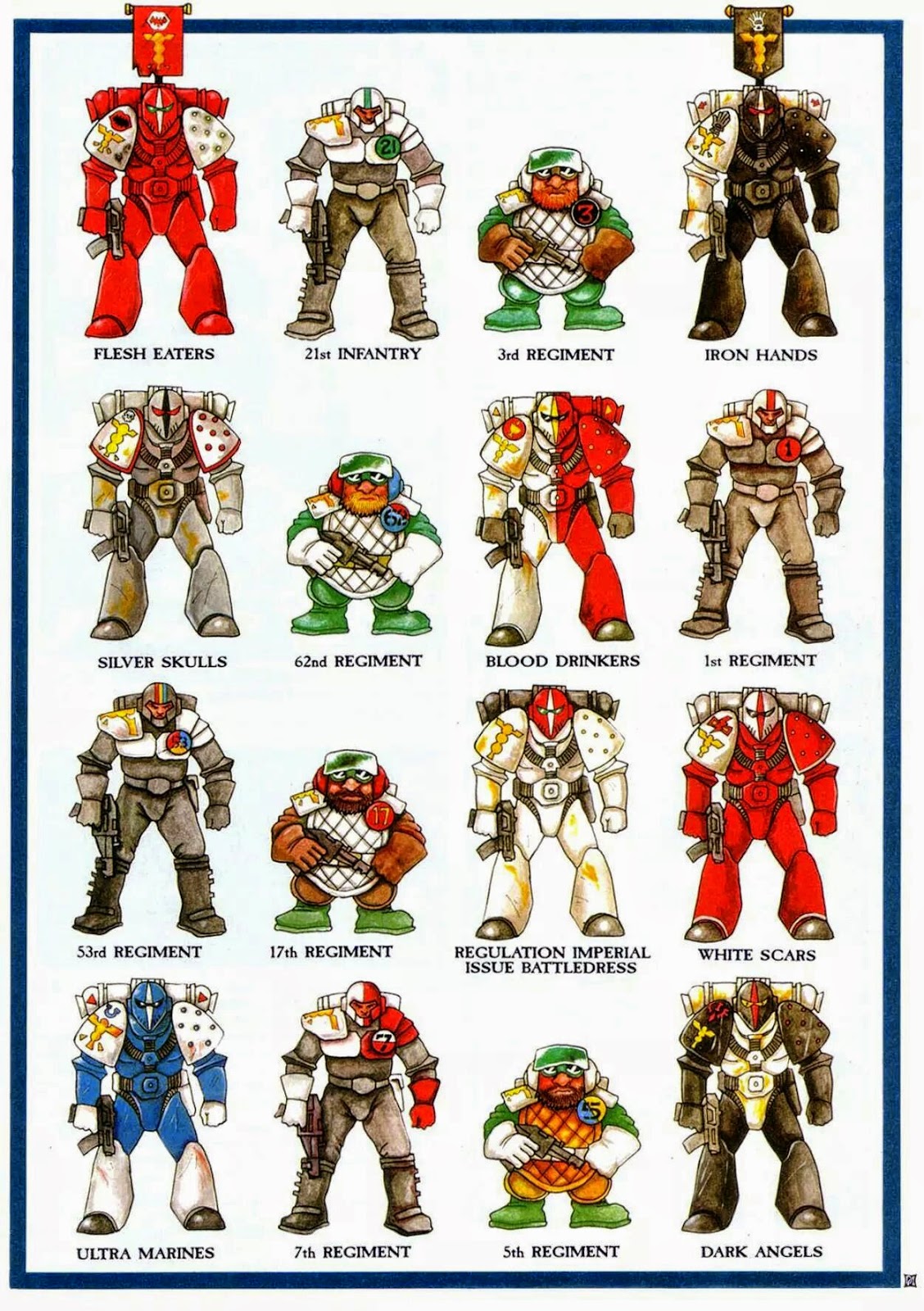 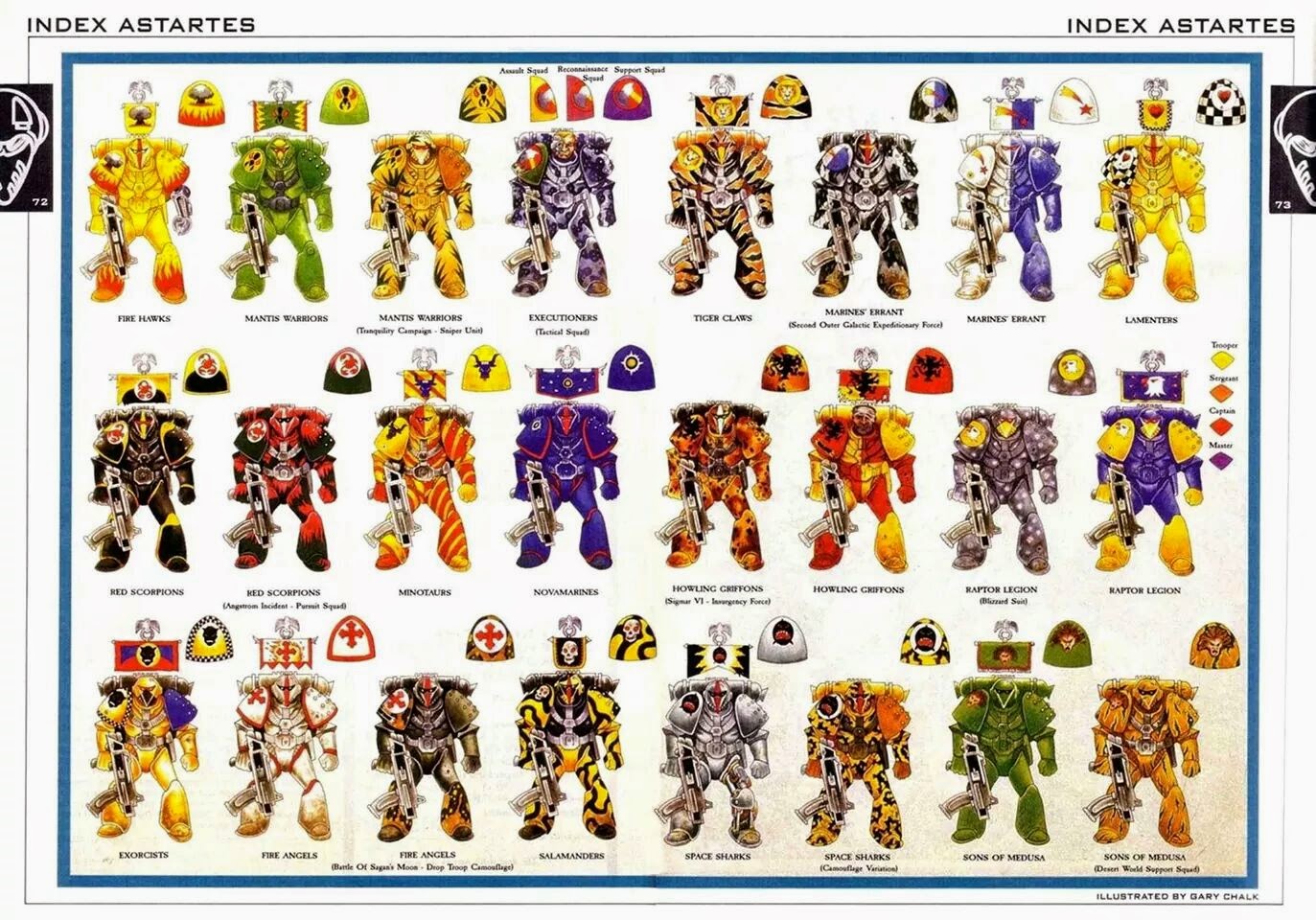 These two images are new to me and I believe that they may have come from one of the later RT compendiums. I do like the interesting and unified styling of the marines on the first image but also love the variation that has started to crap in by the time of the second image. All in all I am glad I found these and it has really sparked my retro fuelled journey in to my hobby past.

I origionally had a few RT marines in my younger days but these were second hand even then as we had no really hobby shops in my old home town so these came to me by way of a car boot sale and had already been painted a good few times. Even with that I had fun painting them and dreamt of the days of owning my own army and having a proper hobby.
Eventually by the time I really got the pocket money and understanding to get in to things like warhammer the new 2nd/3rd edition marines (cant remember which) were coming out and things were moving on, in other words White Dwarf was out and Mail order ruled, that and occasionally I got to a bigger town where there was a GW. To this day I still dont know where my origional RTs we but I have always missed them and have always dreamt of replacing them.


So after joining the Oldhammer page it didn't take much looking before I found their trading page and now I'm a little older and more able to get these rarer things (ie I have a wage) I decided to take the plunge and start seeing what a new old gamer could find, eventually as a result ended up being the proud owner of this little lot:

so what started out as a bit of a trip down memory lane turned in to me looking for a single combat squad of RTB01 marines but eventually became a larger project and in the end so far I have enough RTBs for 3 squads and various sprues to replace damaged parts and to put any damaged modes right. If I am honest its unlikely I will keep all of these as there are some other units I would like. 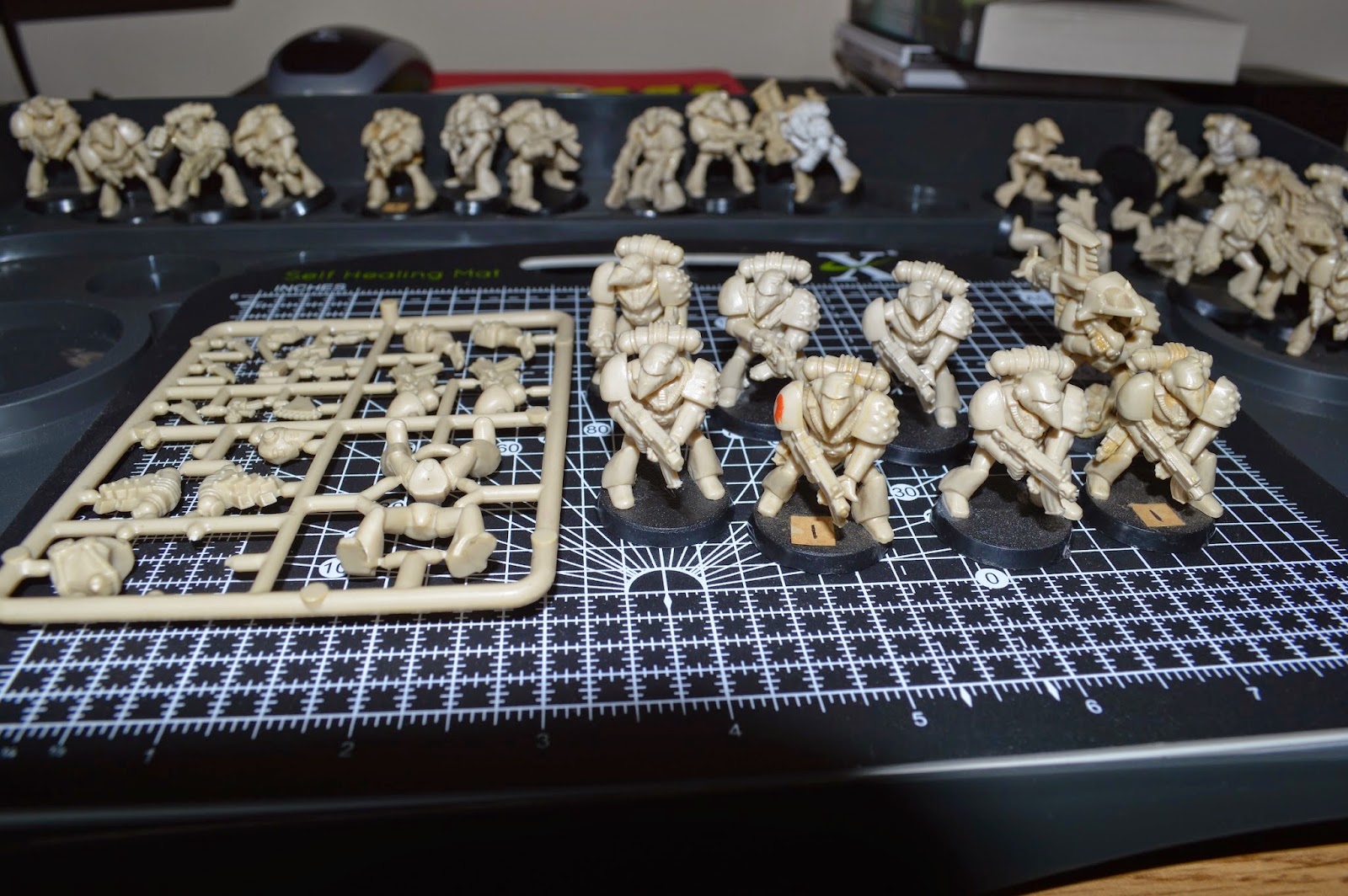 this first squad is in great condition and should just need a bit of tidying up and some random weapons swapping out. 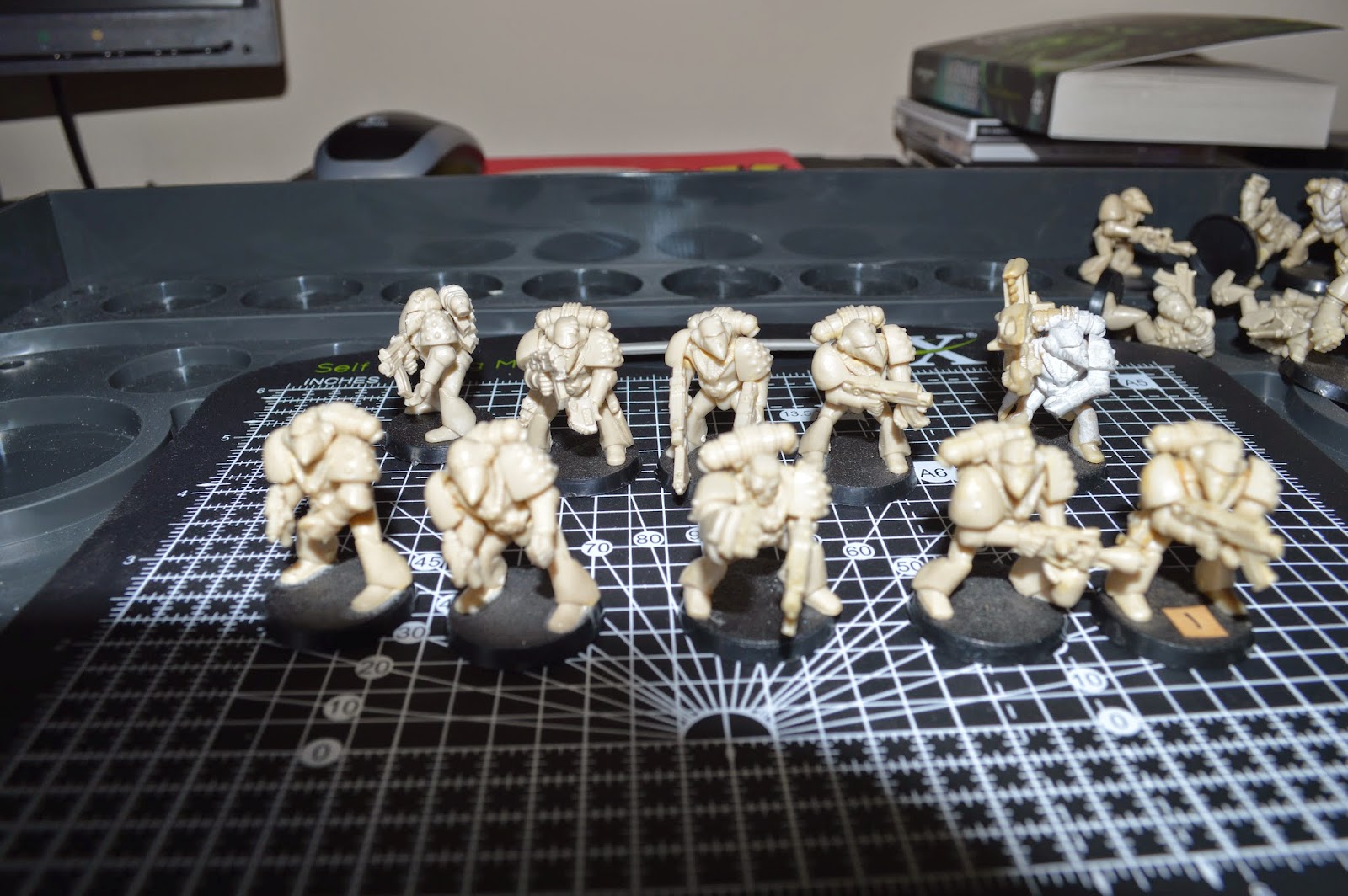 second squad needs a touch more work, there are some nasty glue and mould lines on this unit and also a head swap or two might be needed to remove the bare heads. 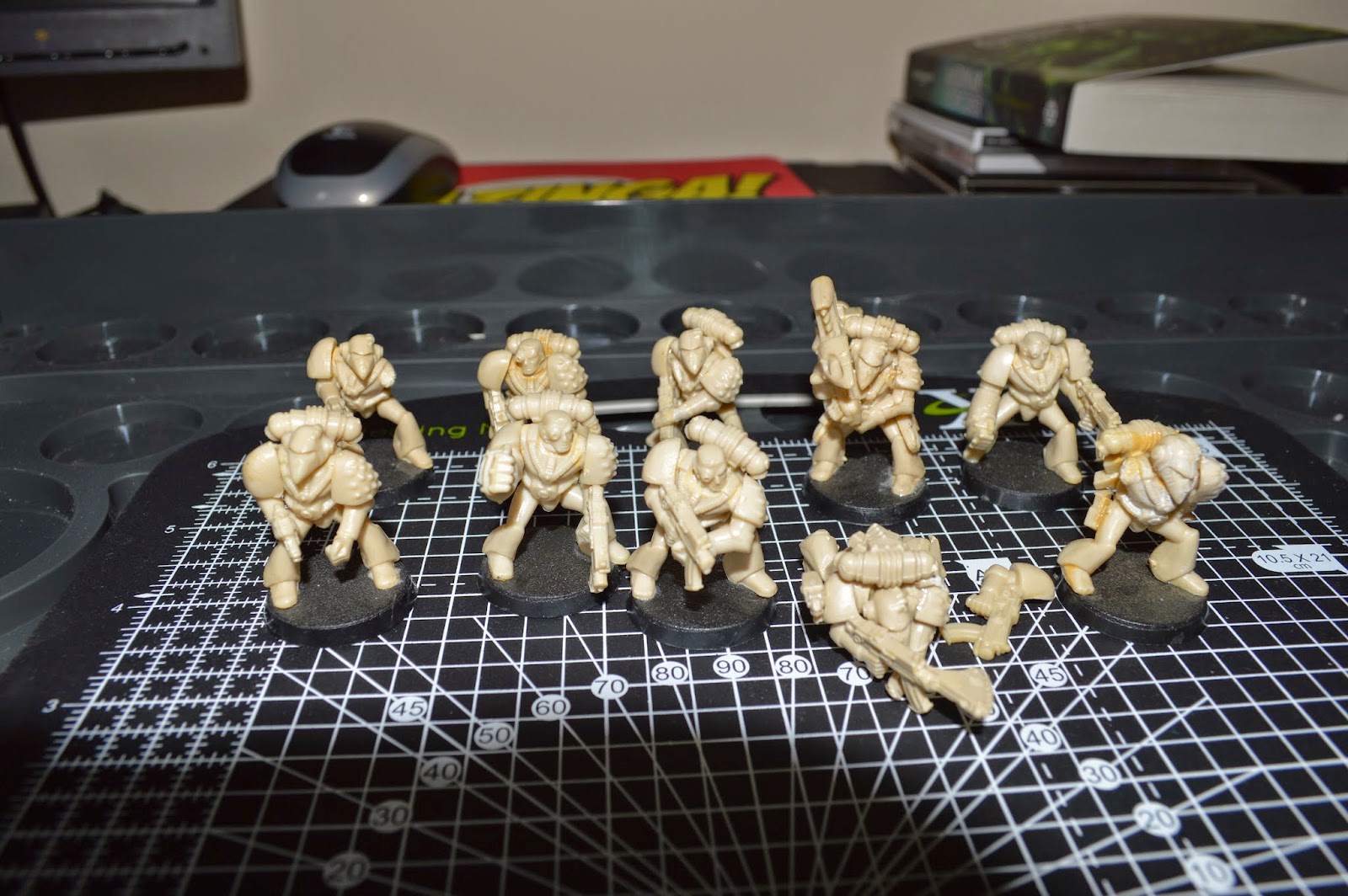 finally we have the third squad, this is the unit I am least impressed with and is made up of the spares from other units and is the one most likely to be used to fill out other units and if any are left to be traded/sold to fund other projects.

Whatever units get kept will all be rebased on to some senic bases I have to replace the older plain ones and also to give the models a bit of height and presence on the table.

I still have a few other bits to come in the post and once they arrive I will be sharing them with you, I have a few plans for the force including some modelling/painting options for a few characters but the one thing that is alluding me is what chapter to paint these guys as!
Any suggestions or thoughts on the chapter that will get some ancients join there ranks would be great so once organised I can start assembling the RT force of my young dreams

The middle pic is of various medics, some IG/squat, some marine (would later be Apothecaries).

As for what chapter, surely one of those chapters jumps out at you, or the old RT standby of Crimson Fists.

I like the sniper conversion in the last pic. I've done a bit of that myself with the old RTB01 marines.

Interested to see what chapter you decide to paint then up as, as there are over 1000 to choose from :)