Details of entry 3 for the Terminator challenge, including the pre-painting picture:

Name: Guido
Model Details:I made this model quite some time ago when dark vengeance came out, the idea was to make him my death wing librarian, but I gave up my dark angel project and decided to make a blood angel terminator force using dark angel rules
But enough with the introduction, the model uses some chaos terminator bitz ( legs, torso) black reach captain front torso, grey knight arms and some green stuff.
I'm planning on redoing the base and, against better judgement, including a slain demon on the base to justify the librarians upper body position. The shoulder pads are a difficult choice that I can't seem to handle, so if you've got suggestions ...
I'm looking forward to this challenge, and hope it boosts my own blog
Www.griffitscorner.blogspot.be
I haven't posted over there for a while, and I'll be using this to start up again.
Pre-Paint Picture: 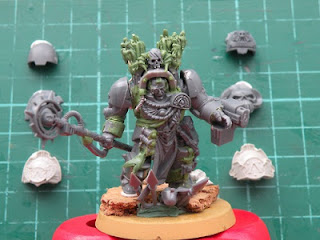 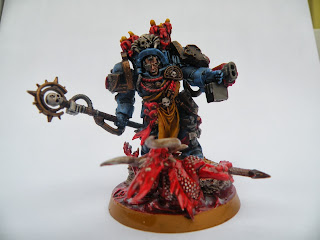 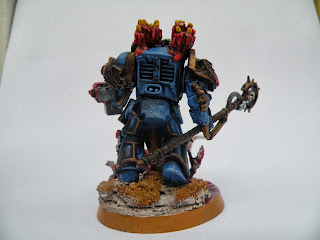 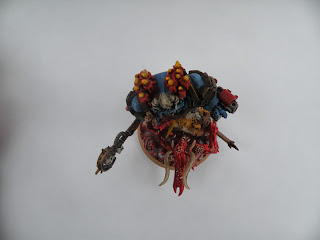 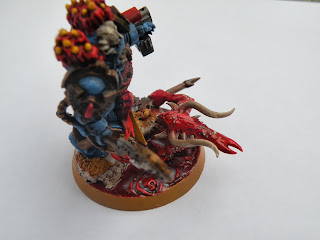 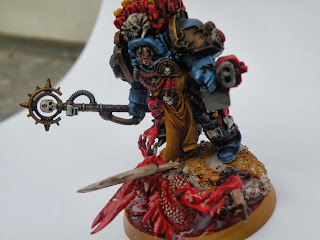 Notes: Greetings one and all,
Let me introduce you to epistolary Lucius Magnus, designated to the first company of blood angels, slayer of the blood demon Alrachmus, Hero of hive Terman and savior of the bright will.
As you might expect from his title he is one of the main characters for my blood angels up coming terminator force.
The model is made from a black reach captain, some chaos and loyal termi bits and a lot of green stuff.
I will be using standard terminator rules most of the time, but he also functions as my blood angel stand in for a Njal stormcaller.
When painting I went for a rather straight forward design, I did some experimenting with inks, and it went ok, but overall I think I've done better models then this one. Be that as it may, I'm glad he is finished, and am looking forward to the next reincarnation :) and the next terminator.
I've had a blast joining in on this challenge, and will make sure to join others as well, not so I can win, but so my models get painted :)
Codified by Millest

I really like this model. The extra conversion work, the use of a power armour torso etc, is brilliant but I really love the base on it. That for me really makes the model.
Good luck mate

Love the base! It tells a story which makes for such an interesting model...awesome job on all the conversion. The paint job is ace as it doesn't detract from the details yiuve added. Good luck!