A pic capture of the oft secretive Electro Priests of the Mezoan Order of the Brotherhood of the Divine Current, more commonly known as the Corpuscarii Order.

Mezoa is almost unique amongst the Forges of the Omnissiah in that the two divergent temples of the Motive force, whilst maintaining their separate worship and traditions, follow the teachings of the "Tacet semita fumi".

To use its lay name the "Path of the Silent Smoke" celebrates the destruction of the Omnissiahs enemies and their extinction and resulting carbon rich release using the Motive force.

This worship of the Carbon Release (or smoke) seems to link back to Mezoas Volcanic nature and the Creed of the Mezoan Cult. There have also being links drawn to some of the Practices of the Salamanders Adeptus Astartes but no verification of this link has been possible. 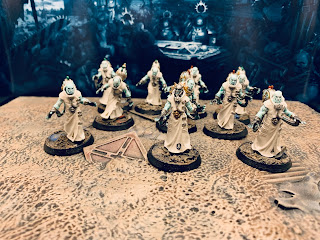 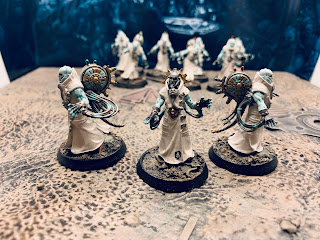 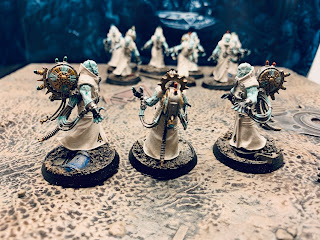 Some fun little conversions for my first Electro Priests using the Delaque Gang bodies, the arms and weapons from the electro priest box and some Stormcast heads. Hit it with some contrast paints and nhilak oxide and boom done.