Warhammer Conquest - its alive and the final package revealed

So the long maligned Warhammer 40000 Conquest part works is due to start again at the end of august in the UK, just getting the initial copies 1-5 are a good buy and can be subscribed to here:
http://www.warhammer40000conquest.com/

the first 4 issues are great value and its being shown that issue 5 comes with a unique Primaris Lt and there appears to be a similar nurgle model too. 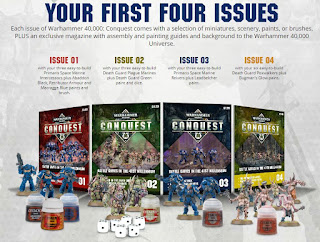 however for the first time the entire collection has been laid bare....

there are a planned 80 issues and after the first two reduced priced issues it will be 7.99 an issue. This means a total of £640 GBP for two complete armies and the terrain for them, as well as paints and brushes. In addition there are a number of free gifts like these:

I will do the maths on that lot there and see if it works out as a good value deal shortly.
over all though just for some extra bits to paint/work on that are fairly cheap it looks good.

So whilst its not cheap for the whole collection the rough maths ive done works out that the marine side alone is coming in at £460.


I've had to make an educated guesses for things like the joint Lts from the box set, the gravis capt and the mkiv and cataphractii models that are there as they arent availible seperately at present, so I have used prices from comparable models.
In addition the characters are the big thing that pushes the price up as they are £22.50 each but those only come in one flavour so their price is well established. Same applies for the repulsor, but where there is an easy build equivilent, like the dreadnough, i have used that price.

Even if you take the worst case scenario and you use the value of the Dark Imperium starter set in to account its still roughtly £360 just for the blue models.
If you assume thats the case as well for the nurgle side you are looking at £720, so nearly an £80 saving and thats before you start on the terrain. I had got a rough cost in my head of the terrain being £220 or there abouts so that pushes it to £940 - personally for that type of saving and knowing that people will want the nurgle models in trades etc I think its a very good price and even I can cope with the waiting for the bits to arrive!
(note i have not factored in paints, tools or freebies)

for completeness here is my crap list of the marine side using what i could work out from the pics:

Thanks for sharing your thoughts. I've been in the hobby for years but considering this as a low-stress way to do some regular hobby. I don't really have time to plan and build armies anymore and it could/should be fun to have something to read and do every week for the next eighteen months!

Appreciate the maths, knowing it's not a straight rip-off is oddly reassuring.