As always all the important bits below:


=========================================
The Deimos Pattern Predator Infernus is an ancient pattern of Predator believed to date back to the hallowed days of the Great Crusade, which has now largely been replaced by the Land Raider Redeemer in many Chapters. The Crimson Fists, Fire Lords and Subjugators, among others, still value its close-range firepower when combating such xenos hordes as Orks, and in particular it is seeing resurgence amongst those Chapters confronting the Tyranid menace. 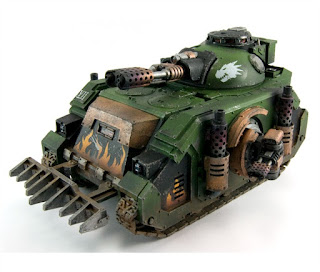 Certain ancient data sources speculate that the Predator Infernus was an attempt to replicate the Baal Predator STC, stubbornly held by the honoured Blood Angels and their successors, and the same conjectural sources imply the superiority of this latter design in terms of speed, armour and armament. The Machine Cult of Mars’ gall at the Blood Angels’ refusal to release this precious relic is widely known, and so the Infernus boasts a fearsome armament in the form of a turret-mounted Flamestorm cannon, often replaced with the anti-armour potency of a Magna-melta, a devastating weapon originally intended for void-war boarding actions. Regardless of turret loadout, the Infernus is usually additionally equipped with sponson-mounted heavy bolters or heavy flamers.

The Deimos Pattern Predator Infernus, designed by Will Hayes, is a detailed resin and plastic complete kit that contains two different turret weapon options, a Magna-Melta and a Flamestorm Cannon, and two different sets of sponson weapons, Heavy Flamers or Heavy Bolters. Experimental rules for this powerful vehicle can be downloaded here, and it is available to pre-order now for despatch from Friday 31st August.
=========================================
another nice, albeit needless tank for the marines, i like it but not sure really on the need for it, if only FW sold those retro front glacis plates as a seperate component!
Codified by Millest